Ulster boss Dan McFarland says his side can't rely on Leinster mistakes if they are to win their first trophy in 14 years in Saturday night's Guinness Pro14 final.

Holders Leinster are unbeaten this season, winning 21 games on the trot, including six in Europe, and are heavy favourites against an Ulster outfit who shocked Edinburgh to book a place in the Aviva decider.

Leinster have been able to achieve that record at the same time as handing out caps to younger players and have easily been the most consistent team in Europe in that time.

McFarland said: "I want to use the phrase 'we have a puncher’s chance' but what have the bookies got us at, minus 10?

"That’s a two-score deficit in a final, they are basically saying we’ve got no chance.

"They obviously can be beaten. Saracens beat them last year in a final. We’ve got to have a physical intensity that can at least match them.

"We’ve got to have a game plan that can get into them but also that we are capable of executing. We’re going to need some of our big players to make big plays and we are going to need to be precise.

"If we can get those things right, we have a chance. If they don’t get them things right then it will help us. But I'm not planning for them to make any mistakes

"We have [been written off], haven’t we? Anybody can write us off.

"Our expectation is that we go in believing that we can win the game."

The sides met in the quarter-finals of the Heineken Champions Cup at the same venue last season – a game remembered for Jacob Stockdale's failure to ground the ball after crossing the tryline. 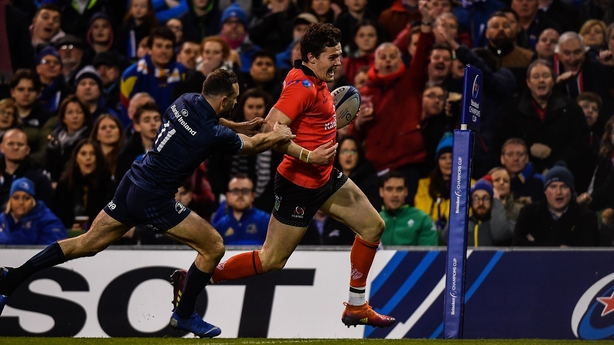 "We’ve got to be better," said the former Scotland assistant coach when asked about that game.

"When you look at it in terms of analysing a performance, we played really well that day and yet we lost so it counts for nothing other than the long-term development of our game.

"The areas we need to be better: that game was lost in a little bit of precision in various areas of the park. We got a lot of things right but there were a few things that we got wrong.

"In contrast when Leinster needed to be precise in that game, they were. It won them the game in the end.

McFarland, 48, who played with Connacht between 2000 and 2006 and coached at the club for four years, got his first shot as head coach just two years ago.

He revealed that he is "relishing the pressure" of preparing Ulster for a first final since the 2012 Heineken Cup.

"You get nervous, you get excited, they are more or less the same thing physiologically anyway.

"[I’m] really looking forward to it.

"Dwayne [Peel, assistant coach] said to me that there are not many people of teams that get the opportunity to feel this pressure so you should be grateful."

Meanwhile, Andrew Brace (IRFU) has been announced as the referee for the final.

Follow the Pro14 final between Leinster and Ulster Munster (7.35pm Saturday) with our live blog on RTÉ Sport Online and the RTÉ News app or listen to live commentary on RTÉ Radio 1.