RG Snyman needs a scan to determine the extent of his knee injury but Munster coach Johann van Graan admitted that it looked "pretty serious".

The giant South African second row lasted just seven minutes of his debut for Munster against Leinster as the Guinness Pro14 resumed in an empty Aviva Stadium.

The lock landed awkwardly after contesting a lineout and was immediately replaced, appearing on the bench afterwards with strapping on his left knee.

"He's going to go for a scan, it looks pretty serious," Van Graan told reporters after the 27-25 loss.

"We’re really disappointed to lose him in the first seven minutes of the game, as well as Dave Kilcoyne [who] came off with an ankle injury and Jean Kleyn with a neck injury.

"All three will go for scans as quick as possible. We’ll have to see what the scan says. He’s a tough man, he doesn’t come off the field pretty often.

"He went up, stole that lineout and fell pretty badly. We’re gutted about that. That’s rugby, that’s what this game is about, you’ve got to come through tough times." 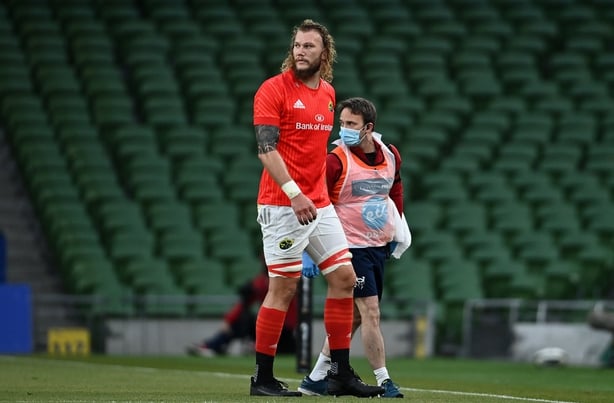 Leinster also reported a number of injures, which was to be expected after such a long period of inactivity.

Dave Kearney will be assessed for a hamstring injury, Cian Healy suffered a "bang on his arm but is okay", said coach Leo Cullen.

Johnny Sexton and Josh van der Flier were nursing hand injuries coming into the clash but Cullen indicated that neither were serious.

Munster will face Connacht next Sunday, while Ulster play Leinster on Saturday, both games taking place at the Aviva.