Winger George Bridge scored two tries in the space of three minutes in the second half to help the Canterbury Crusaders beat the Otago Highlanders 32-22 and clinch the Super Rugby Aotearoa title with a match to spare.

With the come-from-behind victory, the Crusaders moved to an unassailable 28 points, six ahead of the second-placed Auckland Blues, who host the Christchurch-based side in the final game of the domestic competition next Sunday.

The third-placed Wellington Hurricanes had moved to 21 points after their fifth successive win on Saturday and had hopes they might be able to force the tournament to a final week.

The Crusaders are the most successful side in Super Rugby, having won 10 titles in the competition that included teams from Australia, South Africa, Argentina and Japan.

The match was played at a frenetic tempo with the Highlanders taking a leaf out of the book of the Hurricanes, who beat the Crusaders two weeks ago, by refusing to take a backwards step and seize their points-scoring opportunities.

Loose forward Shannon Frizell scored a second-minute try after the Highlanders turned the ball over with an aggressive counter-ruck while winger Jona Nareki made a crucial intercept and ran 80 metres untouched for their second try.

Crusaders fly-half Richie Mo'unga was responsible for all of his side's first-half points with a converted try and two penalties that left his side only trailing 17-13 at halftime.

Michael Collins extended the Highlanders' lead to 22-13 with 25 minutes remaining, but the home side grabbed the lead for the first time when Bridge crossed twice to give them a 25-22 advantage.

Braydon Ennor then put the match beyond doubt with five minutes remaining when he crossed for his side's fourth try.

Coach Scott Robertson, who is known for breakdancing on the field after the Crusaders secured their Super Rugby titles, said it was too early to do so when asked if he would repeat the feat on Sunday.

"It doesn't quite feel right," he told Sky Sports. "We haven't finished the job yet. There will be another time for that." 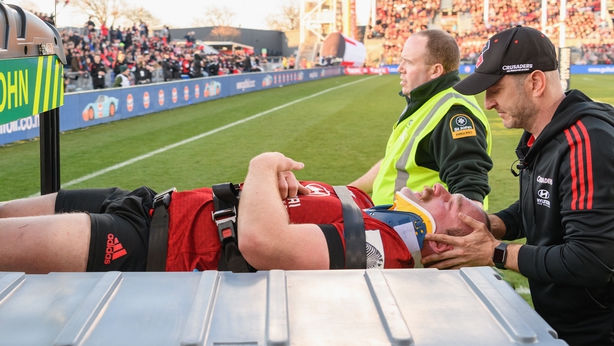 Robertson added that a concerning injury to Irish prop Oli Jager, who appeared to be knocked unconscious in a shoulder charge by Sio Tomkinson that earned the Highlanders inside centre a yellow card, had also tempered the feelings of joy.

The side would therefore have a low-key celebration and the players would have curfews as they prepare for their clash with the Blues, where he expects just as tough an encounter as they faced against the Highlanders.

"We were on the ropes for a lot of the game, but there were just some moments where key guys stood up," Robertson said, referring to the side combining to put Bridge over for two tries inside three minutes, which gave them the lead.

"That performance from the Highlanders did justice to the competition. It showed how much they cared, how much we cared... and how tough it is. It had everything."