Peter Umaga-Jensen scored two first-half tries as the Wellington Hurricanes beat the Waikato Chiefs 31-18 in the penultimate weekend of Super Rugby Aotearoa and consigned the visitors to a ninth successive loss.

The Hurricanes kept alive their slim chances of winning the title with the bonus-point victory and moved to 21 competition points, three behind the table-topping Canterbury Crusaders, who play the Otago Highlanders on Sunday.

The Chiefs, who lost all eight of their games in the domestic competition, will now temporarily bid farewell to coach Warren Gatland, who takes a year's absence so he can concentrate on the British and Irish Lions tour of South Africa next year.

Chiefs captain Sam Cane also sent a major scare through the All Blacks coaching setup, with Ian Foster and his assistant John Plumtree in the stands, when he slumped to the ground after attempting a tackle on Jordie Barrett.

Cane, who Foster has already named as his All Blacks captain, broke his neck in a test match against South Africa two years ago but after being checked by medical staff he was able to walk off the field unaided. 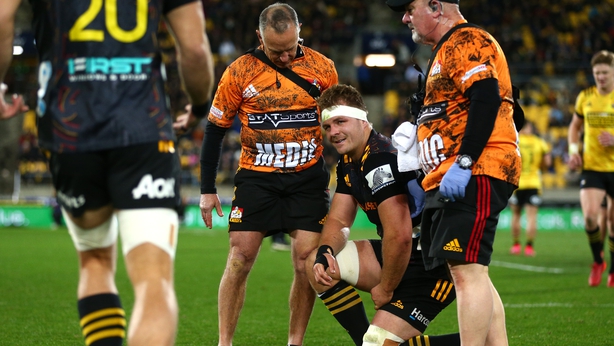 The Hurricanes, who had winger Cobus van Wyk sin-binned late in the first half for dangerous play, dominated territory and possession and were clinical with their execution with Umaga-Jensen's two tries giving them a 12-3 lead at halftime.

Chiefs winger Sean Wainui managed to reduce the deficit after the break before Hurricanes captain Dane Coles and then Van Wyk scored tries to give the home side a 24-13 lead.

Cane's replacement Mitch Karpik dragged his side back into the game with a try and making the final 15 minutes a potentially tense affair for the home fans.

Hurricanes centre Billy Proctor, however, regained the bonus point for his side's fifth try and left them with their title hopes still intact. 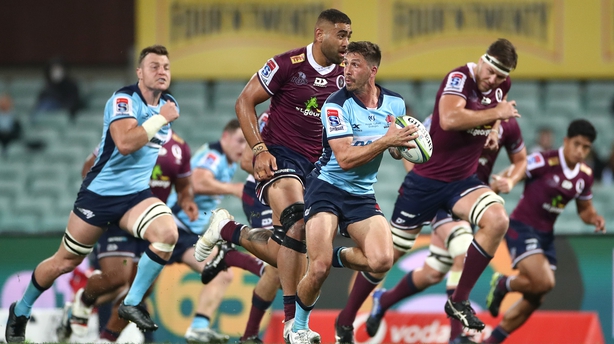 Elsewhere, Jake Gordon (above) scored three tries in 17 minutes as the New South Wales Waratahs produced a blistering start to beat the Queensland Reds 45-12 in their Super Rugby AU clash at the Sydney Cricket Ground.

Scrum-half Gordon crossed in the 10th, 17th and 27th minutes as the Waratahs scored five tries in total in the first half, racing out to a 38-0 lead by half-time.

Their final margin of victory was the largest between the two sides in Super Rugby.

The Waratahs did not play last week and had faced falling out of contention, having won just one of their four previous games.

The home side, however, wasted little time in denting the Reds' own title hopes as they played at a higher tempo and executed at a higher skill level.

Full-back Jack Maddocks and winger Alex Newsome also crossed in the first 40 minutes for the Waratahs, while fly-half Will Harrison was flawless with his goalkicking, slotting all five conversions and an early penalty.

Steady rain, however, started to fall shortly before halftime and both sides struggled with handling the greasy ball after the break.

The Waratahs played a much tighter game in the wet conditions, and hooker Tom Horton extended the lead to 45-0 when he flopped over following an attacking lineout drive.

Number eight Jack Dempsey and Newsome also both had potential tries ruled out after being reviewed.

The visitors' points came courtesy of replacement winger Jack Hardy's first Super Rugby try midway through the second half, before fly-half James O'Connor crossed in the final play of the game in the 82nd minute.