Wes Goosen scored two tries to help the Wellington Hurricanes to a 34-32 win over the Canterbury Crusaders, ending the home side's four-year unbeaten streak in Christchurch and breathing life into the final few weeks of Super Rugby Aotearoa.

Full-back Jordie Barrett added 19 points with the boot as the Hurricanes moved into second place on the table with 16 points, three behind the Crusaders, who also suffered their first loss of the domestic competition.

Crusaders out-half Richie Mo'unga was instrumental in keeping his side in the hunt with flashes of individual brilliance, but he missed a sideline conversion of Sevu Reece's try with three minutes remaining that would have locked the scores up.

The Hurricanes had won their three previous matches in Super Rugby Aotearoa and used a video presentation of their 2016 victory - the last loss the Crusaders had sustained in Christchurch - as motivation.

It worked, with both sides playing controlled and aggressive rugby at near-test match intensity and the score swinging back and forth as both teams seized on their few opportunities to score. Mo'unga and George Bridge scored tries in the first half for the home side, while Goosen crossed for both his tries and Barrett gave the Hurricanes a 21-17 half-time lead with his third penalty.

The Crusaders upped the intensity in the second half and had the Hurricanes under constant pressure but were only able to add to their score when Mo'unga slotted his second penalty.

The Hurricanes then advanced to a 31-20 lead when Barrett added his fourth penalty before Peter Umaga-Jensen crossed.

Mo'unga then took control of the game to set up an attacking scrum that led to lock Quinten Strange's try before the fly-half ghosted through a gap and provided a massive pass to Reece to cross in the corner with three minutes remaining.

Elsewhere, the ACT Brumbies seized control of Super Rugby AU with a clinical 24-0 win over the Western Force for a third successive victory that propelled them to the top of the table.

Tom Wright, Irae Simone, Will Miller and Connal McInerney all scored tries for the Brumbies to take them to 14 points, four ahead of the Queensland Reds in the domestic competition.

The Perth-based Force, who were invited back into the competition after being dumped from Super Rugby following the 2017 season, were competitive throughout but remain winless after three games of the 12-week competition.

The Brumbies, who needed a late try to beat the New South Wales Waratahs last week, did not make the same mistake and jumped out to an early 12-0 lead following long-range tries for winger Wright and inside centre Simone. 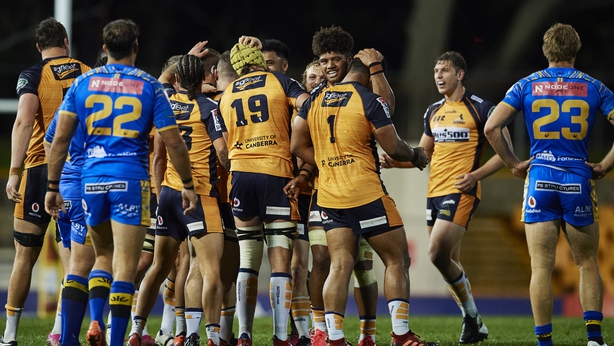 Fly-half Bayley Kuenzle was only able to convert Simone's try and the match then became something of a tussle as the Force attempted to recover from the early setbacks.

They had three attempts at scoring from attacking lineouts, but the Brumbies, arguably the best club side in the world at executing the tactic, were able to halt them every time.

The Force, however, were also able to keep the Brumbies at bay for the rest of the first half and the Canberra-based side went into halftime with their 12-0 lead.

The Brumbies repeated the pattern of the first half when flanker Will Miller scored in the corner just three minutes into the second half to extend the advantage to 19-0.

Despite controlling much of the territory and possession it took them until the 66th minute before they drove McInerney over -- from an attacking lineout drive -- and then kept the Force out for the final 15 minutes.