Queensland Reds fly-half James O'Connor kicked a late penalty to secure a 32-26 win and snap a seven-year losing streak to the New South Wales Waratahs as professional rugby returned to Australia on Friday after a three-month hiatus due to Covid-19.

The Wallabies utility back struck in the 76th minute, giving the Reds victory after 11 successive defeats by their southern rivals and leaving home fans happy at the end of a scrappy display from both teams.

The first match of Australia's domestic "Super Rugby AU" brought a modest crowd to Lang Park, with groups of fans spaced apart in the terraces to maintain social distancing.

They saw a willing, if error-strewn contest, as players struggled to shake off the rust from a long break following the suspension of the wider Super Rugby competition in March.

Law variations borrowed from rugby league to speed up the game, such as a drop-out from under the posts instead of a five-metre scrum, and the 50-22 kick, ensured plenty of running rugby, as did ample handling errors, with a slew of counter-attacks sparked by passes finding grass. 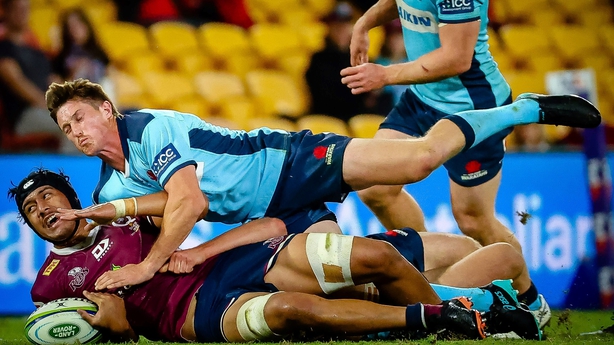 The Reds dominated early, surging to a 19-7 lead before the half-hour mark when scrum-half Tate McDermott punished a dozy Waratahs defence by taking a quick tap and bounding over.

Penalties on either side of the break kept the Waratahs in touch, though, and they charged in front when jet-heeled full-back Jack Maddocks galloped over after a superb inside pass from flanker Lachlan Swinton.

Number eight Harry Wilson snatched back the lead for the Reds by diving over from a metre out but hotheaded prop Taniela Tupou threatened to undo the good work when he was sent off for a second late charge in the 67th minute.

Waratahs fly-half Will Harrison slotted a penalty from long range a minute later to level the score at 26-26.

But his team-mate Swinton strayed offside to allow O'Connor to boot the winner and the Wallaby garnished the victory with a second penalty kick after the siren.