Australia rugby league coach Mal Meninga has confirmed that negotiations are under way for the Kangaroos to play New Zealand's rugby union team in a 14-a-side hybrid game later this year.

The Courier Mail in Brisbane reports that the clash is scheduled to take place on 5 December.

In an interview with the paper, Meninga said the event would "take the Kangaroos to the world".

"We are in serious negotiations," he said.

"There will be global recognition. We are still in talks but obviously news of this has got out. I'm keen to make this happen. We want to play the All Blacks, hopefully we can get the concept off the ground.

New Zealand Rugby boss Mark Robinson was quoted as saying negotiations for the fixture were indeed under way.

"We have had an approach," he told reporters on a conference call on Thursday.

"We're interested in learning more and ... we will work that through and go through the proper process of making a decision if it has got merit to go further.

"We've had the option put to us of this hybrid game with the Kangaroos and it's one of many different scenarios in a unique year like this that we are considering with being innovative and having a focus on trying to consider revenue-generating ideas at this time given the financial climate that we're in," Robinson said, according to TVNZ.

The All Blacks are expected to play the Wallabies in a four-Test series this year, with the first match planned for October. 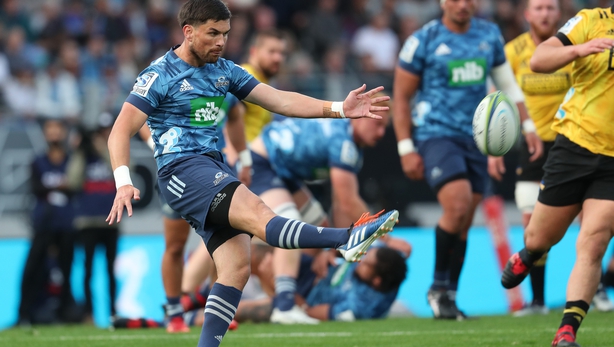 Meanwhile, Super Rugby Aotearoa is expecting bigger crowds and better refereeing this weekend, with Robinson confident the 10-week domestic competition is building up a head of steam.

Crowds for the four games held so far were averaging about 26,000, an increase of more than 105% on the wider Super Rugby tournament before it was shut down due to Covid-19, Robinson said.

Television viewing figures were up 88%, he added.

"It's brilliant news," he said. "There is a real excitement building and we have some real momentum."

That upward trend looks to be continuing this weekend.

Ticket sales for Saturday's clash between the Auckland Blues and Otago Highlanders are on track to breach 25,000, while the Canterbury Crusaders are also expecting a large crowd for their first home game.

The unbeaten Blues go into their match knowing referees have at least taken complaints about some of their decisions on board, as a stricter line on the tackle, breakdown and offside line saw a slew of penalties dished out.

"We are putting our hands up and saying that we're not quite getting it right at the moment."

However, Lawrence pointed out the penalty count had fallen from the first week to the second.

"In week one the average penalty count was 30, in week two it was down to 25," he said. "We know it will take a little bit of time.

"We're close but not quite at our best."