Garry Ringrose and Cian Healy are back in full training with Leinster after recovering from injuries sustained during the Six Nations.

Centre Ringrose broke his finger in Ireland's opening win over Scotland while prop Healy injured his hip in the third-round defeat to England, which turned out to be the country's last game before the coronavirus pandemic halted the competition.

Both players would have been doubtful to figure in the remaining fixtures against Italy and France but may now get that opportunity later in the year. 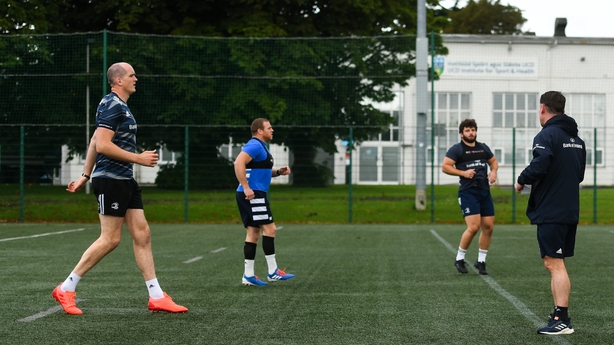 Leinster, along with Munster, returned to group training in their high performance centre in UCD yesterday after over three months away.

The Pro14 season has been abridged, with just two rounds of local derbies in each country now remaining. Leinster will face Munster at the Aviva Stadium in their first game back on 22 August, before playing Ulster a week later. This will be followed by a semi-final likely to be against Munster or Edinburgh on 5 September.

Conor O'Brien (hamstring) and Vakh Abdaladze (back) are also back in full training while Dan Leavy is in the final stages of his running rehabilitation following the double cruciate-ligament knee injury that saw him miss last autumn's World Cup.

Winger James Lowe has returned home to New Zealand for personal reasons, and on his return will follow all Government health advice and guidelines around quarantine or isolation.

Lowe spoke to New Zealand media this week about the prospect of donning the green jersey once his three years of residency (since changed to five) are complete in November.

I grew up living next to @JamesLowe_03 for nearly 20 years. But here we are. The story of Nelson-born James Lowe who was on the verge of the @AllBlacks , now in line to suit up for Ireland 🇮🇪 pic.twitter.com/Rn2nOqrgcb

"Not in my wildest dreams could I have ever thought of wearing the three-leaf clover," he told 1News.

"If the opportunity comes, wholeheartedly I'm going to give it my all."

Lowe said playing in the Six Nations would be a particular thrill.

"It's so intense, packed-out stadiums, people crying during anthems. It's crazy to watch."