Less than a year since reaching the Super Rugby final, Argentina's Jaguares face the risk of collapsing due to the coronavirus pandemic.

It was 11 months ago that the only Argentine side playing in the southern hemisphere's premier club competition fell at the final hurdle, beaten 19-3 by perennial winners Crusaders in New Zealand.

But with the 2020 season now abandoned due to travel restrictions imposed by the global virus outbreak, the Jaguares' very existence is in doubt.

While New Zealand and Australia are preparing to launch domestic Super Rugby tournaments after many of their coronavirus containment measures were lifted, Argentina is still under lockdown.

And Jaguares don't have the possibility of taking part in a domestic competition even when the lockdown is eventually lifted.

Their only hope of competition would be to join an eventual South African domestic competition but that would undoubtedly prove costly, particularly given the reduced income from being forced to play in empty stadiums.

"The New Zealand teams will play in New Zealand, the Australians in Australia and the South Africans in South Africa," said Jaguares captain Jeronimo de la Fuente (below). 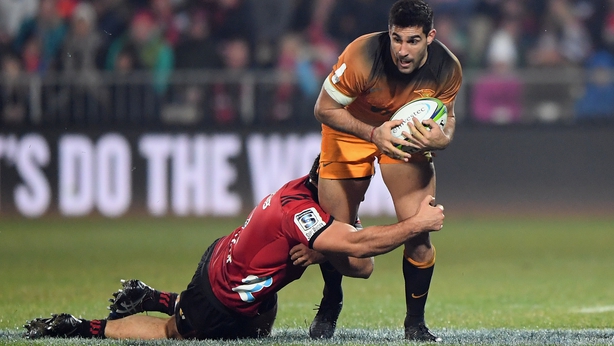 "The Jaguares are left a bit isolated and we're waiting to see if we get invited to another competition. It would be difficult but it's also a possibility."

Argentina's rugby union (UAR) has even paved the way for Jaguares players to join foreign sides to allow them to maintain their match fitness.

Wing Emiliano Boffelli has received offers from Paris and English clubs, as have hooker Julian Montoya and center De la Fuente, while Stade Francais are also rumored to be interested in second row Guido Petti.

"I'm going to wait until the last minute to see what decision to take because I'm counting on" the Jaguares, said De la Fuente.

"If an offer needs to come from Europe to help the UAR, I'll go. It pains me a lot to think that Jaguares won't exist any more, that they can't play in Super Rugby."

Six players, including De la Fuente, will be out of contract at the end of the year anyway.

'A lot of uncertainty'

And that could leave the Jaguares on their own and with no-one to play against.

One possible option would be to join the newly-created - and almost instantly suspended - Superliga Americana de Rugby that included fellow Argentines Ceibos as well as teams from Brazil, Chile, Colombia, Paraguay and Uruguay.

Jaguares, though, would be on a totally different level to any of those.

"I've spoken to quite a few players and they're waiting for a solution. There are 35 or 40 contracts that will disappear," he said.

Losing their Super Rugby representatives would be a huge blow for Argentine rugby, which fought for many years to be invited to the top table of rugby's yearly competitions.

Finishing third at the 2007 World Cup and then reaching the 2011 quarter-finals allowed Argentina to be welcomed into the former Tri Nations in 2012 to form The Rugby Championship alongside Australia, New Zealand and South Africa.

Four years later, the Jaguares were admitted to Super Rugby.

"We thought very carefully about the Jaguares project, it was growing and we reached a great position that we had dreamed of," said UAR president Marcelo Rodriguez

"One way or another, they will be in a competition that will be sustainable for the UAR from an economic and financial point of view."