Premiership and Championship rugby clubs in England have been given provisional authorisation to begin non-contact training amid the coronavirus pandemic.

The Professional Game Board announced this morning that clubs would need to provide a written declaration to Premiership Rugby and the Rugby Football Union that a number of key criteria have been met.

Stage one protocols allow for individuals or small groups to train in the same facility, while adhering to social distancing rules at all times.

Chris Booy, the PGB chair, said: "I can confirm that the Professional Game Board which incorporates representatives of the Rugby Football Union (RFU) Premiership Rugby, Rugby Players Association (RPA) and Championship clubs has given provisional authorisation for Premiership and Championship Rugby clubs to move to Stage 1: Elite Sport Return to Training Guidance.

"The clubs will need to satisfy a number of requirements to start Stage 1 as we continue the huge amount of work being undertaken to enable a safe return to training.

"The welfare of the players, management and staff is our only priority, and we look forward to the season resuming when it is safe to do so."

The Premiership season has nine regular rounds, semi-finals and a final still to go, and concern has been expressed that its conclusion could clash with dates for the scheduled Six Nations in October.

Clubs and provinces in Ireland will hope to get the green light to resume group non-contact training from next week when the IRFU announces its 'return to rugby guidelines' on Friday. 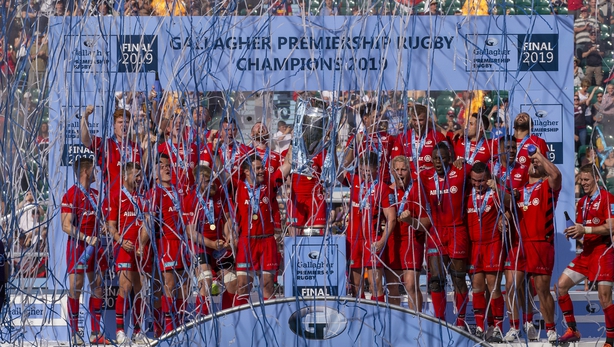 The Premiership Rugby board has also given its unanimous support to adopt the 52 recommendations set out in Lord Myners' review of the competition's salary cap regulations.

Myners' recommendations include stripping titles for serious offences, and greater accountability for clubs, players and their agents.

Premiership Rugby chief executive Darren Childs said: "I am immensely grateful to Lord Myners for his thorough, diligent and robust approach to conducting this review.

"It's a credit to our clubs that they have acted so quickly to support these recommendations and take the Premiership Rugby salary cap into a new era. We want to create the gold standard for delivering sporting integrity, financial viability and competitive balance.

"The next stage is for us to consult with our clubs, RFU and RPA and to enshrine these new regulations for the start of the 2020-21 season, which will be created for the long-term benefit of our sport."

Saracens have accepted their imposed relegation from the Gallagher Premiership and pledged to win back confidence and trust.

Saracens, winners of four league titles in the last five years, will play in the Championship next term, having faced the impossible task of reducing their wage bill by up to £2m to comply with regulations for the current season.

The defending champions were relegated following salary cap breaches that initially cost them 35 points and a £5.36m fine.