Tadhg Furlong admits not being able shake Fergus McFadden's hand and tell him "it was a pleasure to play with you" is among his greatest frustrations in the current lockdown.

Last week, Ireland and Leinster back McFadden confirmed his intention to retire from professional rugby at the end of the season.

Because of the Covid-19 restrictions, McFadden's provincial and international team-mates have had to send on their praise via WhatsApp messages and Zoom calls.

Furlong is back on the family farm in Campile, Co Wexford, and though he is content to help his father work and catch up with family, the prop is missing the unique atmosphere of a dressing room.

"We can't Train together or spend any time together but we're given programmes to follow, gym programmes, running programmes," he told RTÉ 2fm's Game On.

"No one really has any craic nowadays; they're just staying indoors so there's not a whole lot to catch up on. You miss it. You miss sitting in the dressing room after a hard session, the general chit-chat.

"Fergus announcing his retirement... (you miss) giving him a handshake, looking him in the eye and saying, 'it was a pleasure to play with you'."

The 27-year-old has, like all the Leinster players, been given special training routines to stay as fit and strong as possible.

Still, nothing compares to the cut and thrust of a competitive match.

"We're lucky Leinster got a few weights out to us before it all closed down. We can get through a fair bulk of gym work at the minute. Hopefully that keeps strength levels somewhat decent.

"I love playing rugby. I love training  and doing all the skills that goes with it. I still get giddy when I go out training even if it's a dirty day in January. Of course I miss that. That's why I played the game as a young fellah.

"Gym work, I wouldn't have that natural grá for. It's not easy to train on your own I can tell you that. It's just about getting goal-specific about what you're going after and getting something out of each session.

"I haven't been home for this long since I left school at 17. It's been great spending time with family et cetera.

""I'm lucky to be out in the countryside most of the day just mucking around with the father and fooling around the place really." 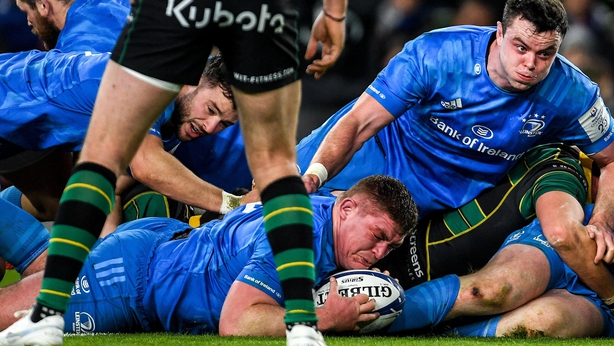 Reflecting on the early days of his career, Furlong said it was an immense inner drive that lifted him to the highest level.

He may not be a big lover of the gym, but a deep hunger to improve has always burned within. Now, Furlong is just desperate to get back to doing what he loves best.

"When I left school - and it sounds horrendous saying it - but I'd a deep hatred for the Dublin lads nearly. I suppose you have a massive chip on your shoulder and something to prove. I definitely was well behind in terms of the gym and an S and C point of view.

"But once you start to get coached every day of the week you start seeing improvements in your body and in your game It makes you greedy for more. It lights the hunger within you to keep pushing on.

"The break has good points as well as bad for the rugby environment. I think everyone is going to go back under no illusions about how lucky we are to play the game we do."