Sport is not the most important thing in the world. Although we'd like to think it is at times, there are much more serious issues at hand currently and cancelling all sporting events for the foreseeable future is the right thing to do without question.

But what are sports people doing amidst the sporting lockdown?

At the time of writing there are rumours flying around that there will be total lockdown in this country and far beyond. Pubs have been forced to close, shops are set to have shorter opening hours but I’m in shock that gyms haven’t yet been forced to shut their doors for the greater good of the community.

In saying that, sports people can’t just down tools.

I am involved with three teams directly, all of which have to and do take their training and planning quite seriously. At the beginning of the postponement of sport we were told it will be for two weeks, but you’d want to be naïve to think we’ll be back playing competitively in a fortnight. Still, you have to prepare accordingly. 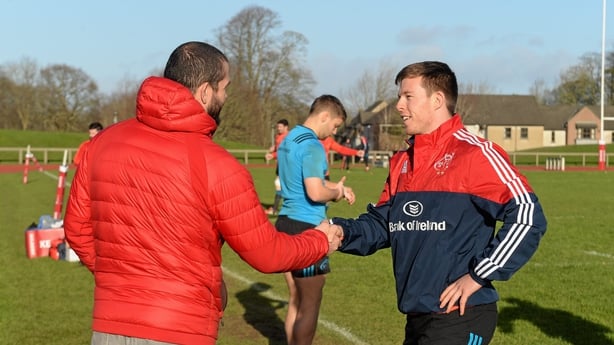 The unknown is the biggest fear for most people. Will they be able to go back to work soon? Will they stop earning? How will the economy fair as a result of all the lockdowns and necessary restrictions?

For athletes there is concern about their strength and fitness. With club gyms closed and group training forbidden, it is a very strange time to be involved in elite sport.

Currently there are programmes including home workouts and individual conditioning sessions being sent out on group forums to attempt to keep these athletes in some sort of shape.

Research suggests that you won’t lose all of your fitness levels or strength even across a sustained number of weeks, but you do have to attempt to slow the loss with the minimal effective dose required to do so. What this is for each individual cannot be written in black and white and it is up to the coaches to try to strike that balance.

On the other side of this, as much as players may think this is an opportunity to get even fitter, leaner or better at their skills, it is not a time for significant improvement.

To improve fitness levels beyond what they are already at will take a lot of effort and output from the body. That isn’t the best idea at the moment because training and exercise is a stress. It’s a controlled stress but a stress nonetheless and too much of any stress will hinder your immune system.

Therefore it is more about striking the right balance of doing enough to keep the stove warm but not going too far with trying to get fitter, faster and stronger.

In terms of body composition, it is also not a time for these athletes and players to become leaner than ever.

Eating more at maintenance, which means to maintain your weight and eat according to your activity levels, is the best idea for now. Getting leaner usually involves eating less calories and more than likely compromising your carbohydrate intake.

This is another stress on the body unless these elite athletes have been operating outside a range of body composition that they should be at anyway for their level of sport. Stress on the body will result in a dampened immune system and again, this is not what we want in times of uncertainty and spreading illness.

Athletes and sports people, the general public too, are trying to find any bit of equipment to keep themselves healthy.

There are some who have a bike in the garage, others that have nice set ups with dumbbells, kettlebells and possibly more home work out equipment and then there are those that are making their way to local pitches to get some work done.

Will sport continue in two weeks? Absolutely not

Keeping your motivation in uncertain times like this can be tough. Some athletes like to have someone there to compete against to push them on. Motivationally, it can be tough to go training in these circumstances on your own or in very small groups.

The good thing is that most local pitches have remained open up to now and local parks and walkways are still accessible. Most can get out for a walk, jog or a run free of charge and it won’t be the worst thing in the world to get some fresh air amidst the extra hours being spent at home.

From my own experiences over the weekend, these public places are also busy so trying not to encroach on anyone’s space and trying to find somewhere a bit quieter and obscure are good ideas.

Will sport continue in two weeks? Absolutely not.

However, for the elite players among us they have to prepare as if their sport could be continued in the next couple of weeks or they’ll risk being left behind when everything resumes and we are back to normality.

It isn’t easy to keep going during these times but maybe that’s why they are already the elite players. They have the discipline to keep going and the motivation to push themselves on their own when nobody is watching.

Despite all the panic in sporting circles and in active populations sport is not more important than human beings, although for some of these human beings sport is their life.

Discipline plays a huge role in sport and right now for sports people discipline is needed to act within the guidelines that are being published by the HSE and the government and not to go on a solo run using the excuse of sport to get by.

No team is more important than the wider community and no sports star has more rights to risk more than the average Joe.

No doubt it is a strange time for everyone involved but we must all operate as a much bigger team now to not only help the most vulnerable in society but to help ourselves individually in the long run too.