Connacht welcome Irish internationals Ultan Dillane and Dave Heffernan back into the fold for the Guinness Pro14 trip to Southern Kings this Sunday.

The pair were both released from the Ireland camp following the postponement of the Six Nations tie with Italy, and duly met up with the squad for the clash in Port Elizabeth (kick-off 1pm Irish time).

Dillane starts in the second row alongside Joe Maksymiw with Heffernan named among the replacements.

In all there are six changes from the side that lost to Edinburgh last weekend.

Paddy McAllister is drafted back into the front row alongside Shane Delahunt, while there's also a start for prop Dominic Robertson-McCoy following an ankle injury to Finlay Bealham.

The back row is unchanged for the third straight game with Jarrad Butler captaining the side at number 8, with flankers Paul Boyle and Colby Fainga'a alongside him.

Caolin Blade comes back into the starting side to partner Jack Carty in the half-back positions, while there’s also a change at centre where Tom Daly is named alongside Kyle Godwin.

The final swap comes on the wing where Connacht’s record try-scorer Matt Healy makes up a back three with John Porch and Tiernan O’Halloran.

"We didn’t get the result we wanted in Edinburgh, so this week has been all about ensuring we get another win on the board," said head coach Andy Friend.

"The Kings are a dangerous side, especially at home, so we will have to be at our very best.

"We’ve been able to call on two international footballers in Dave and Ultan which is a nice boost for us. This mini block of three games is key for us so I believe we have named a squad that can get the job done on Sunday and finish on a high before the short break." 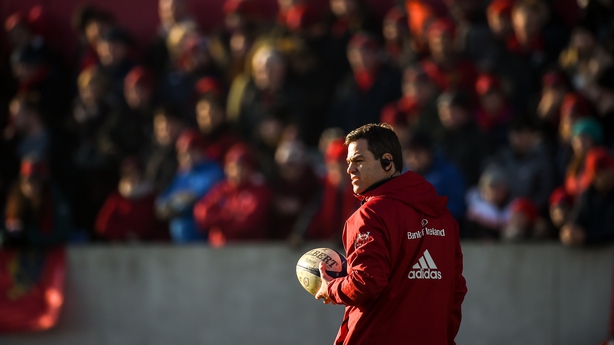 Munster head coach Johann van Graan will give youth its fling in Saturday's clash against Scarlets at Thomond Park after including three Academy players in his squad.

Back-row Jack O'Sullivan keeps his place at No 8 and is set to make his seventh senior appearance with Diarmuid Barron and John Hodnett among the replacements.

There are five changes to the side that secured a bonus-point win away to Zebre last week.

Billy Holland returns to captain the hosts with Chris Farrell back from international duty as Dan Goggin, Kevin O’Byrne and Stephen Archer also return to the starting XV.

Mike Haley starts at full-back with Calvin Nash and Darren Sweetnam completing the back three.

Craig Casey and JJ Hanrahan continue in the half-backs with a centre partnership of Goggin and Farrell.James Cronin, O’Byrne and Archer pack down in the front row with Fineen Wycherley and Holland in the engine room.

A back row of Arno Botha, Chris Cloete and Academy man O’Sullivan complete the side.

Niall Scannell injured his knee against Zebre and is out, though he's expected top make a swift return.