Ireland lock Devin Toner says winning his place back in the Ireland team "means the world" following on from his World Cup disappointment.

The towering Leinster lock was controversially left out of Joe Schmidt's squad for the Japan tournament but, after two appearance off the bench in wins over Scotland and Wales, starts in the second row for tomorrow's Guinness Six Nations clash with England at Twickenham.

The 33-year-old was due to be a replacement but Ulster's Iain Henderson dropped out after the birth of his son.

"It means the world to me," said Toner, who will line out for his country for the 70th time.

"If you had told me a couple of months ago that I'd be starting against England in Twickenham I probably wouldn’t have believed you so, yeah, delighted to get the chance.

"Obviously, Hendy was picked to start and he’s had a fantastic tournament so far and very happy for him on the birth of a second child, so he’ll be at home getting some sleep, I doubt it. But it means the world to me to be playing again.

"It’s been brilliant [to be back]. I’ve enjoyed every minute of it.

"It’s great being back in the environment. It’s an easy place to slot back into, obviously because I’m very familiar with everything that’s going on.

"It’s been really good. The start of the season for Leinster went very well and obviously coming into the Six Nations so it’s just really good being back in the environment and being involved." 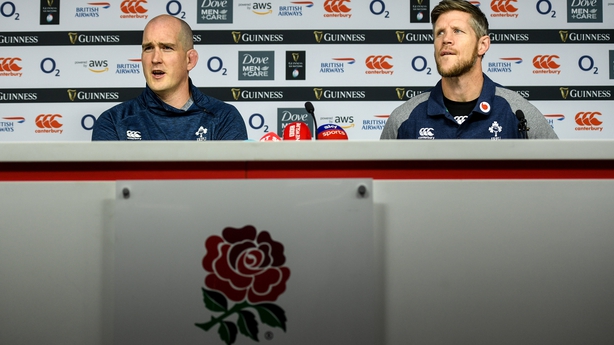 Forwards coach Simon Easterby confirmed that "everyone came through" through the captain's run at Twickenham this afternoon without issue and had praise for Toner's attitude following his World Cup heartbreak.

"It was probably the most difficult decision we had to make but he went back to Leinster and, credit to him, he just knuckled down, did what he does really well.

"I think it's always a bit of a crossroads in someone's career when that happens but Dev has said, 'You know what, it's happened but I'm going to make sure that it's difficult not to pick me come the Six Nations'.

"And that's exactly what he did in his performances for Leinster, both when we were at the World Cup and continued to do so.

"It's a big challenge for Dev and the rest of the pack tomorrow but in my time, I could think of all the games where, as a forward pack, we've been right in the mix and Dev has been involved in the majority of those performances.

"He knows that it's going to take a huge effort tomorrow for us to come out on the other side with a result but I think the work that he's put in with Leinster and in the time we've been together as a Six Nations squad has shown that he's fully committed to that.

"Maybe in his own mind he's making up for a bit of lost ground and credit to him for doing that."