Leinster maintained their unbeaten start to the season with a 21-13 victory over Ospreys at the Gnoll in Neath.

Leo Cullen's side are now 19 points clear of second placed Ulster at the top of Conference A of the Guinness Pro14 while the Ospreys are rooted to the bottom on 13 points.

Tries from Tommy O'Brien, Josh Murphy and Cian Kelleher and the boot of Ciaran Frawley was enough to get Leinster over the winning line. All the Ospreys could muster was a Luke Morgan try and eight points from the boot of Luke Price.

Ospreys outside-half Price struck a post with a monster early penalty effort from halfway, but after being forced into action as an early replacement, it was O'Brien who opened the scoring.

From a ruck, Leinster moved the ball nicely to the blindside and quick hands - captain Scott Fardy delivered the crucial pass - sent O'Brien over. Frawley converted. 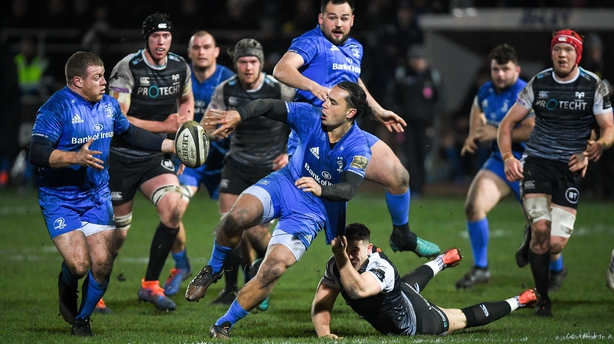 Ospreys centre Kieran Williams came close to a response with a barnstorming run and Price missed another penalty while Williams also produced a fine turnover with Leinster on the attack.

Price finally put the Ospreys on the board just before the break and it soon got better for the hosts as they claimed a half-time lead.

Leinster continued to attack from deep but a key error from Jimmy O'Brien in midfield allowed Morgan to swoop up the ball with the one-cap Wales wing running in unopposed from 50 metres out. Price converted which meant Leinster turned around 10-7 behind.

Leinster started the second forty minutes on the attack as they began to build pressure on the Ospreys try line. And after Rhys Ruddock was held up just short of the line, the ball was recycled for Murphy to power over from short range with Frawley converting.

Cullen's side continued to pile on the pressure as they lay siege to the Ospreys try line in the final quarter of the game. And they thought they had finally put the game to bed but Kelleher was held up over the line.

The visitors forced replacement Ospreys hooker Sam Parry to be yellow carded for a professional foul which inevitably put the Ospreys under severe pressure.

And with a man advantage, wing Kelleher crossed in the corner from Rowan Osborne's pass following some powerful carrying by the visiting forwards.

Byrne converted to secure a well-earned victory for the province.