A supporter has claimed she was asked to remove a rainbow flag after displaying it in the ground as Israel Folau made his debut for Catalans Dragons.

Controversial signing Folau is hoping to resurrect his career in Super League after being sacked by Rugby Australia last year for making homophobic comments on social media.

Folau lined up for the first time for his new club on Saturday as the Dragons hosted Castleford at the Gilbert Brutus Stadium in Perpignan.

Alison Grey, a Castleford fan, posted on social media during the game that she was asked to take down a rainbow flag she had displayed in support of LGBTQ rights.

She tweeted: "Just been told I am not allowed this flag because the club does not allow it. How disgusting."

She later said: "We were asked if we could take the flag down, first because it was against health and safety. When we said that there were other flags around the ground they gave up.

"They then came back to us later on and said it was against the views of the club to have the flags."
Catalans issued a statement saying this was not club policy and they would look into the matter.

It read: "Rainbow flags are not banned at our club. It is not forbidden. We are gathering more information about what happened."

A statement from Super League read: "Everyone should have the right to respectfully express their views. We are investigating. We will receive a full report by the end of this weekend and have more details by Monday." 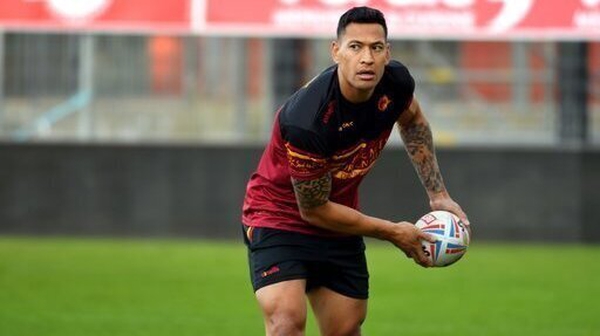 Folau set to make Catalans debut this weekend against Castleford