Conference A leaders Leinster continued their unbeaten season with a 36-12 bonus-point win over Cheetahs at a rain-lashed RDS.

Newly capped Ireland hooker Ronan Kelleher closed out the first half with his seventh try of the Guinness Pro14 campaign, adding to Will Connors and Michael Bent's earlier scores, as Leinster made light of the wind and rain to lead 22-0.

The Irish province had 82 per cent of possession by the break and continued to dominate, setting up further tries for Rhys Ruddock and man of the match Connors. Replacement forwards Luan De Bruin and Aidon Davis both crossed for Cheetahs during the final 18 minutes.

Leinster fared better with their early ball retention despite playing into the wind and a heavy rain shower. There were ground-gaining runs from Fergus McFadden and Joe Tomane, but conditions made the line-out a lottery. 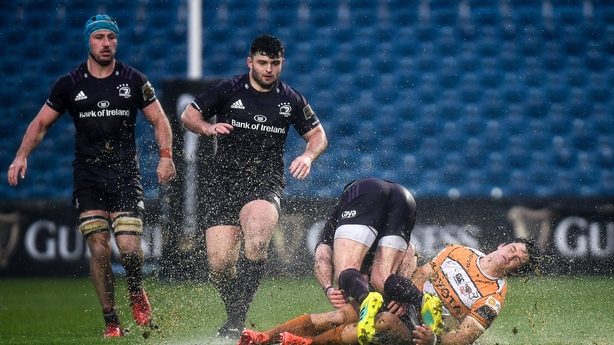 Although a Bent knock-on ended a promising set of carries, Cheetahs leaked a series of penalties. That allowed Max Deegan, fresh from his own Ireland debut, to break menacingly from a 20th-minute maul before Connors spun out of a couple of tackles to touch down.

The young flanker's first senior score was neatly converted from the left by Ciaran Frawley, who also knocked over a penalty following prop Charles Marais' 28th-minute yellow card for a no-arms tackle on Peter Dooley.

Deegan's break from a short Frawley pass opened up the South Africans' defence again, and after Kelleher was stopped short, a well-supported Bent soon burrowed over for his third try of the season.

Kelleher increased his influence with a turnover penalty, and the subsequent maul - right on the stroke of half-time - saw the 22-year-old front-rower power over for a deserved five-pointer. Frawley's conversion flashed wide from the right.

Luke McGrath's snappy break quickly launched Leinster forward on the resumption, Ruddock soon driving in under the posts with Ross Molony on his shoulder. The latter secured line-out possession for the drive which Connors broke from for his second try of the day, converted once more by Frawley. Cheetahs got on top at scrum time nearing the hour mark, their front row reserves forcing repeated penalties. Leinster lost replacement Sean Cronin to the sin bin for a no-arms tackle close to his own line, with Rhyno Smith denied a try by the scramble defence.

De Bruin eventually squeezed over in the 62nd minute, captain Ruan Pienaar supplying the extras. Cheetahs lost centre Benhard Janse Van Rensburg to the bin for a dangerous sliding challenge on McFadden, but lock Davis stretched out to turn some powerful team carrying into a last-minute try.