Ireland made it two wins from two in this season's Six Nations with an impressive 31-12 victory against Wales at Energia Park on Sunday.

The Girls in Green had the bonus point wrapped up just after the break, when Linda Djougang crashed over, before Storm Ciara arrived and greatly disrupted the second-half.

Strong winds and driving rain led to plenty of handling errors for both sides.

Not that Ireland were complaining, as it killed off any chance of Wales getting a head of steam going when they responded immediately to Djougang's score.

Ireland looked nervy early on in the game, and the passes weren't connecting.

It all started with Eimear Considine kicking a ball clear from her own 22. It looked to be heading for touch, but the breeze took it back into play, and the move developed from there.

Bebhinn Parsons collected an attempted Welsh clearance, before beating a couple of players and getting over.

The second try arrived nine minutes later. Hooker Cliodhna Moloney got the score, after a lovely pass in the tackle from Sene Naoupu released her.

The third was all about the power and pace of Lauren Delany.

Eimear Considine popped the ball to her on the right touchline, and she cut inside, danced past the Welsh defence, and ran it in from outside the 22.

Wales had Gwenllian Pyrs sin-binned shortly afterwards, but it seemed to lift the visitors.

Frustratingly for Adam Griggs' side, their patience paid off, and Lauren Smyth got in at the corner to keep the contest alive at the break. 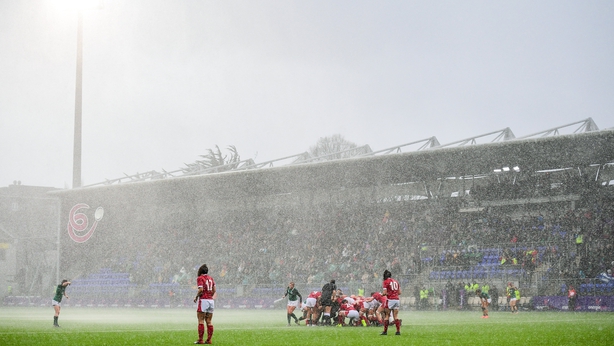 Again, the visitors didn't give up.

They were queuing up to get over from close range, and it was Siwan Lillicrap who would provide the finish to leave 12 points between the sides with over a half an hour to play.

Then the storm arrived, which made any form of flowing rugby almost impossible.

The scoring was completed with the clock in the red in the second-half.

Ireland were putting the visitors under tremendous pressure in their own try line, and referee Aimee Barrett-Theron had little option but to go under the posts and award the penalty try.