The 30-year-old dual-code international, who has not played since being sacked by Rugby Australia last May for making homophobic comments on social media, joined the French Super League club on Tuesday.

The signing has caused a storm, with even Super League executive chairman Robert Elstone condemning the move, and Wigan responded by declaring their home game against the Catalans in March a 'Pride Day'.

Thomas, himself a former dual-code international but who made his name in rugby union, is gay and said he will refuse to watch any matches involving the Australian.

"So Folau has joined the @SuperLeague. Really upset by this as the game, players, and fans were so good to me," tweeted Thomas, who had an 18-month stint in rugby league playing for Crusaders and Wales in 2010 and 2011 after the end of his rugby union career.

"All I hope is that as much as Folau wanted his right to speak, then players and fans alike are aloud (sic) their right to respond. I will never watch him."

So Folau has joined the @SuperLeague .Really upset by this as the game, players, and fans were so good to me.All I hope is that as much as Folau wanted his right to speak, then players and fans alike are aloud their right to respond . I will never watch him🌈🏉❤️

Folau, who is expected to arrive in Perpignan later this week or early next week, will obviously sit out Saturday's opening game of the season against Huddersfield but could make his first appearance for the Dragons in round two at Wakefield, who plan to follow Wigan's lead.

Trinity chief executive Michael Carter revealed he was approached by fans wanting to bring flags to the game within minutes of Folau's signing being announced and added: "We'll have some news next week on something that will be encompassed within our round two game."

Folau, who said on social media that "hell awaits" gay people, played for Melbourne and Brisbane before switching codes but was told he would not be allowed to return to the NRL.

However, he was not officially banned and the Rugby Football League said it was powerless to prevent the player's registration, saying the moral responsibility for deciding whether to sign a player sits with individual clubs. 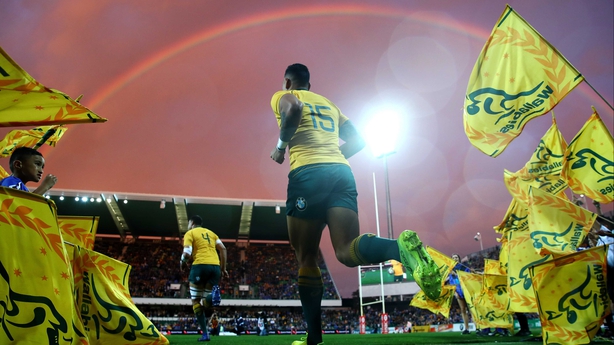 Carter says he was not aware of any of the other Super League clubs being consulted on the matter and would have strongly argued against the move.

"I don't believe he should have been allowed in," he told the PA news agency. "Are we seen now as a safety net for anybody who has been kicked out of other competitions?

"I don't think is the sort of advert we should be putting out for our sport. The views he holds are abhorrent and to hide behind religious beliefs is wrong.

"This is a modern world and we've got to be accepting of people who may not share the same views.

"We've got to make the world a tolerant place and I don't think there's any tolerance in the views he holds.

"I am a director of Super League but I have had no say on this matter whatsoever."

"It did cross our mind but we made no approaches," he told BBC Radio 5 live. "We had filled our salary cap - that's the reality."

Wigan's players will wear rainbow socks and laces for the game against the Dragons in an act Lenagan insists is a positive move.

"We've shown we're proud of our diversity and we're taking positive action to show we want to be proud of our Pride Day," said Lenagan, who has already spoken to both Catalans and Stonewall.

"It's intended to be a positive enjoyment of inclusivity."

The signing of Folau prompted a strong reaction from Halifax forward Keegan Hirst, the only openly gay player in professional rugby league.

"I'm shocked and disappointed at the signing of @IzzyFolau," Hirst said on Twitter. "Our great game is tasked with fighting against homophobia and standing up for the values it puts such high stock in.

"It shows none of the bravery, camaraderie or integrity @rfl expects from its players, staff and fans."