Former New Zealand centre Sonny Bill Williams is prepared to take on the responsibility of being the focal point of rugby league's bid to conquer North America as he prepares for his first season with Toronto Wolfpack.

Williams, who has excelled in league and union, as well as having a heavyweight boxing career, is hoping to be ready to feature in Toronto’s debut appearance in England’s Super League, against Castleford Tigers in Leeds on 2 February.

But the 34-year-old, who signed a two-year contract with the promoted club worth a reported $10m, is well aware that his impact on the sport is expected to go well beyond his contribution on the field.

"I understand the responsibility is to use my profile, in whatever capacity I can to help grow (the game). Whether that is doing a bit more (media) or going out and speaking to young kids then I am all for it," he told reporters at the team’s media day at Premier League soccer club Manchester City’s academy.

"But is it going to change the way I am or do I feel the need to change who I am? No. I just do me and do the best I can.

"This is such a blessed opportunity to do this on and off the field and if I can open a few more doors for young kids back in New Zealand, Australia and the islands to succeed and to be a part of this, how cool would that be?" he said. 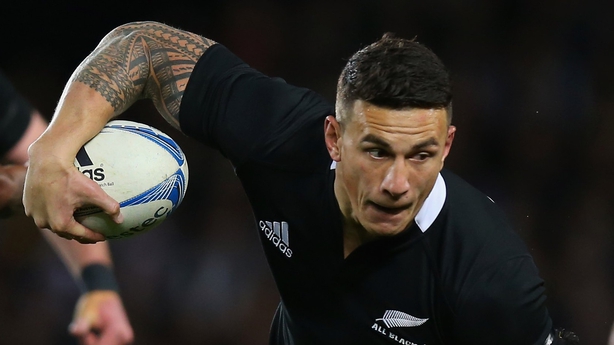 Williams was part of the All Blacks World Cup-winning teams in 2011 and 2015 and played his 58th and final Test at November's World Cup in Japan in their bronze match win over Wales.

But despite a five-year absence from the 13-man game and his Wolfpack coach Brian McDermott insisting he will not rush him into action, Williams believes he will be ready for the opener at Headingley.

"I’m feeling pretty good. If I can get through the next couple of weeks then I dare say I will be putting my hand up but he has been a coach for a long time and I have been a player for a long time as well so I am sure we will have that conversation," he said.

"He understands that it is a long game and that is what we are trying to play here. I want to be flying towards the end of the year, not necessarily the start of the year.

"I have been out of the game for five years. If I do play I might be a little bit rusty but I am just banking on hard work, keeping it simple and trying to fit into how the team plays and then add my little bit of flavour to that," he said.

Toronto are conducting pre-season training in Manchester and due to weather concerns will not play at their home venue of Lamport Stadium until 18 April when they take on Hull FC.

Williams, who is of Samoan heritage, also represented New Zealand at rugby league but says he is not giving any thought to a return at international level.

"I haven’t proved myself at Superleague level. Being out of the game for five years, for me to start thinking about playing for New Zealand or playing for Samoa is just ridiculous.

"I am fully focused with the Toronto boys and to see if I can still play the 13-man game," he said.

Williams still feels he has something to prove in the sport, however.

"You always have that. I wouldn’t still be around without that drive to succeed."