The northerners laboured past win-less Bath at Kingspan Stadium, two tries notched in the opening 10 minutes of the second half from Robert Balacoune and Will Addison enabling them to grind out a victory despite an indifferent performance.

The win assured Ulster of their place in the the last eight of the competition and are destined to finish the pool phase as the best runners-up.

Tomorrow they will learn the identity of their opponents, with Exeter Chiefs, Racing 92, Toulouse or Clermont Auvergne potentially lying in wait but the one certainty is that they'll be on the road.

It was torture, wasn't it? Absolute torture

Reflecting on their latest win, McFarland admitted it had been a less than flowing display.

"We started a little bit flat which is really unusual. I just wonder whether we had a little bit of expectation that we were going to win.

"We didn't play that great but we got the early score. I didn't think that did us any favours. After that, they bored us to death with kicking, lots of injuries, and going down early. It took the steam out of the crowd and fair play to them, it was a good tactic.

"Because we showed that when we kept hold of the ball and could attack, we were going to score tries. But the game died a death and lasted a long time. We weren't good enough to score tries and get comfortable at any point.

"Bottom line is though that we've won the game. We're 5 and 1 for the second year in a row. We're into the quarter-finals and we'll really look forward to that.

"It was stop-start, they kicked the life out of the game, lots of injuries, really slow. There was no momentum and the crowd was getting really frustrated with that.

"To be fair to the crowd in the second half, they really picked it up and lifted the spirit of the stadium. I thought we came out in the second half much better. Much more bounce under our feet, better kick-chase, better speed in defence and attack and we wrestled the game away from them."

It's the second year in succession that McFarland has guided Ulster into the quarter-finals but the coach isn't inclined to become too triumphalist about the achievement.

"It's more about how you go (perform). Because you don't know at the beginning of the year what pool you're going to get," he observed. 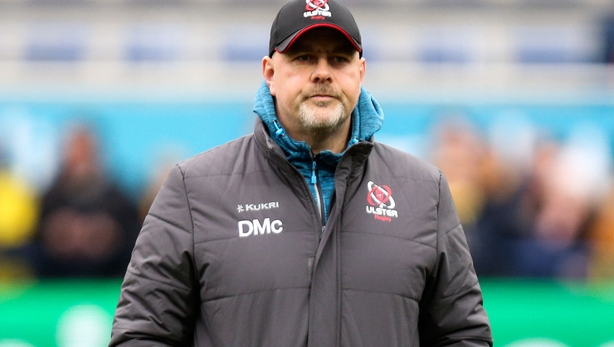 "People are down on Munster but the bottom line is they were picked in a pool with Saracens and Racing. That could easily have been us. We ground out wins at the start of this pool and we've won five games. It was easily enough for us to qualify as the best second placed team for the second team in a row.

"We're proud of that but it would be really nice if we could go against what is the standard procedure which is to lose away from home in the quarter-final.