It is weeks like this where Munster head coach Johann van Graan really earns his crust, but a penny for his thoughts regarding his out-half conundrum for Sunday's must-win Champions Cup assignment in Paris.

Failure to beat Racing 92 at Paris La Défense Arena, where they are yet to lose a pool game in the competition since moving to their new surroundings last season, and Munster will be forced into a watching brief for the knock-out stages. A win keeps the show rolling for the visit of Ospreys the following week.

To add to the challenge, van Graan has a selection dilemma for the number 10 jersey. Joey Carbery has been ruled out for between two and four months, Tyler Bleyendaal remains sidelined with a neck injury and JJ Hanrahan is rated as only 50/50 to be available for selection according to Van Graan.

All of which means 20-year-old Academy player Ben Healy could well be asked to step into the breach, or at the very least, take his place among the replacements, six weeks on from his one and only senior appearance, the 16-18 home defeat to Edinburgh in Cork.

The pedigree is there for all to see. Two years ago he captained Glenstal Abbey to their first ever Senior Cup success, avenging their defeat in 2017.

Having represented the southern province at under-18, under-19 and under-20 level, and Ireland Under-18s and Under-19s, he battled it out with Harry Byrne last year in the Under-20 Six Nations; the Leinster man starting the first three games and Healy getting the nod for the gripping win over France and victory away to Wales to secure the grand slam.

Later that summer he battled it out with Jake Flannery for a starting spot at World Rugby Under-20 Championship.

The Nenagh native joined Garryowen after his Leaving Cert, where Sean Skeehan, his Glenstal Abbey coach, was a familiar figure in the coaching set-up.

Garryowen head coach Conan Doyle says the the transition to adult rugby is one Healy has grabbed with both hands.

"Coming out of schools rugby, and even under-20s, it’s not the same as coming up against guys that are maybe 10 years older," he told RTÉ Sport.

"It’s a big adjustment for any young player, but particularly a tall out-half. He would have been in the deep end at the start, but I think it has been a valuable part of his development. You will be targeted if you can’t hold your own, but he’s adjusted well.

That part of his game is exceptional. I wouldn't say it lightly. He kicks exceptionally well off his left

"I never saw a moment where he wasn’t ready to run the show. He always had the confidence in himself."

Healy’s first game for the Limerick club sticks in Doyle’s mind for the very reason that he gave an exhibition of kicking.

At one stage the callow 10 spotted space deep inside opposition territory, the try line about 40 metres from where he received the ball. With nonchalant execution, his crisp left-footed effort pinned their opponents back with a five-metre lineout. Not bad for a right-footed player on his first outing.

"That part of his game is exceptional. I wouldn’t say it lightly. He kicks exceptionally well off his left and puts a lot of practice into it.

"Even his drop-offs, he kicks with a Dan Carter like style, and puts it exactly where he wants off either foot."

The season was interrupted with the Under-20s Six Nations, but returned to steer his team to a 45-21 defeat of City of Armagh in the Bateman Cup Final.

"He's very much a guy who wants to do well wherever he is. He doesn’t want to play for the sake of playing. When he is with us, he is all about making sure Garryowen are winning," with the Limerick men losing just once with Healy in the side.

His development has progressed nicely at Munster, but he has continued to navigate the AIL waters this term.

Instead of Dooradoyle, Healy could well be pitching up at Paris La Défense Arena, and should he be called upon to answer Munster’s SOS call, Doyle has no doubts that the out-half possesses sufficient game intelligence, and the kicking game, to cause damage to a star-studded Racing 92. 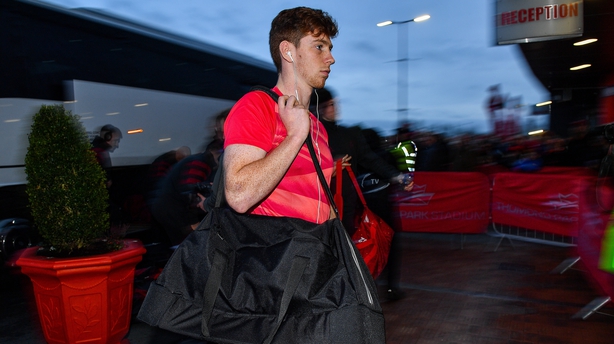 "He’s probably one of the best kickers in the country, at all levels. Off the tee and out of hand. In a stadium like that [La Défense Arena], if Munster were to win a penalty anywhere inside the Racing half, I wouldn’t be surprised to see Ben put the ball on the tee and over the bar.

"I think if Ben is on the pitch, he will take the kicks. He’d have no shortage of confidence in himself. I think he would be very disappointed if he wasn’t kicking as it’s one of the strongest parts of his game."