Seán O'Brien says Joey Carbery’s latest injury setback is a major blow for the player, Munster and Ireland, but believes the out-half can come back an even better player from the experience.

Munster head coach Johann van Graan confirmed today that the 24-year-old would be out for between two and four months following surgery on damaged ligaments in his wrist, effectively ruling him out of the Six Nations.

Former Leinster player O’Brien has dealt with his fair share of injury setbacks over the years and is edging closer to making his London Irish debut since his summer switch.

The 32-year-old told 2fm’s Game On it was a "huge step" to get back running in training last week and says rehabilitation has been going well since arriving in London.

The 2011 ERC European Player of the Year believes resilience is built up through time on the sidelines and offered his support to his former team-mate after discovering the extent of the wrist injury.

I messaged him earlier and just said, 'keep the faith. It will pass and you will be back flying in no time'

"It’s hugely disappointing for him, Ireland and Munster. I know he will be very frustrated and upset," he said.

"From my own experience, you build that over a period of time of getting knocked back a little bit. 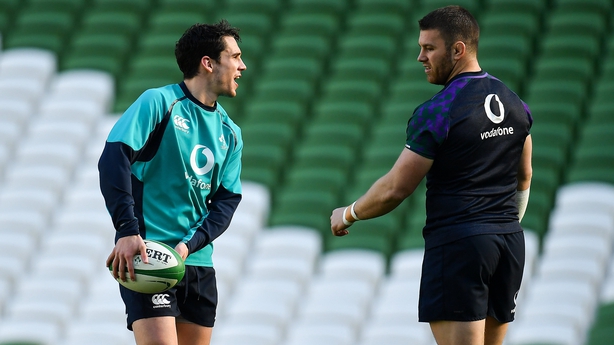 "He’s been very unlucky. I actually messaged him earlier and just said, 'keep the faith. It will pass and you will be back flying in no time’, but it’s just one of these things that sometimes you get a roll of injuries and he’s had that now.

"Hopefully after this he gets a bit of a run and gets a few good games under his belt, a bit of consistency in what he is trying to do."

While it [the injury] is disappointing, there is an opportunity to get better

A hip injury has delayed O’Brien’s first outing in London Irish colours, and the abrasive backrower says using the enforced sidelined time can have a significant impact upon a playing return.

"I always said, and I say it to the younger guys, with injuries, you can always come back a better player, in better shape, fitter, stronger, fix things that may have been creaking on you," he added.

"While it is disappointing, there is an opportunity to get better."