O’Halloran is one of a dozen changes for the home side, while Johann van Graan has changed two thirds of his team, with Craig Casey making his first Pro 14 start at scrum-half.

Quinn Roux will captain Connacht in his 100th appearance for the province and the Ireland international is one of four changes in the pack. Denis Buckley and Finlay Bealham come into the front row, where Dave Heffernan remains as hooker, while Roux partners Ultan Dillane in the second row.

The two changes in the backline sees O’Halloran return from his recent injury lay-off and Tom Daly forcing his way into midfield alongside Bundee Aki.

Not surprisingly, Munster have decided to ring the changes for the away trip, with 10 changes in personnel from the side that was downed by Saracens last weekend. 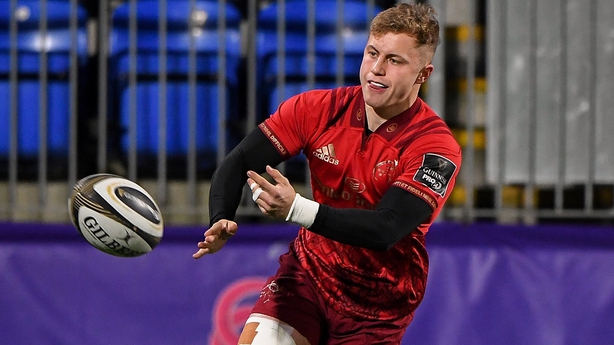 Having previously featured twice off the bench, Craig Casey (above) makes his first start at scrum-half. In the backline, only Chris Farrell and JJ Hanrahan remain from the Allianz Park defeat.

Shane Daly takes the 15 jersey, with Calvin Nash and Liam Coombes occupying the wing spots, with Farrell partnered by Dan Goggin in midfield.

Kilcoyne, Kevin O'Byrne and Stephen Archer start in the front row with the second-row partnership of Kleyn and Holland unchanged.

Gavin Coombes, Chris Cloete and Stander complete the side.

Tall order for Ulster to turn over in-form Leinster Rugby