Ulster head coach Dan McFarland paid tribute to John Cooney after the scrum-half produced another man-of-the-match performance in the province's win at Harlequins in the Champions Cup.

A week after kicking the match-winning penalty against the same opposition, Cooney scored two tries and kicked nine points with the boot in a 34-10 bonus-point win at The Stoop.

The Dubliner also made a try-saving tackle early in the second half when Ulster were only 10-3 ahead.

"John was the first person afterwards to talk about his team-mates and the positions he was able to get in on the back of our mauling, which I thought was excellent," McFarland told RTÉ Sport.

"But top man. He chased back to make the tackle on Ross Chisholm when he broke free and that was pretty crucial at that stage of the game.

"It's very pleasing to come away from home in the Champions Cup and get a bonus-point win.

"Harlequins came hard at us in the first half. We knew they would but I still think they surprised us. They are big big men and they were very physical around the ruck area.

"That score (Cooney's first try) just before half-time was pretty important for us and in the second half we wrestled a bit of control of the game."

Cooney was omitted from Ireland's World Cup squad but is the joint top try scorer in the Champions Cup so far (4 tries) and his form this season has led to speculation he could challenge Conor Murray for the position of Six Nations starting scrum-half.

"All we know is that he's playing well and he's certainly putting his hand up," said McFarland.

"But there are a lot of good nines in Ireland. It's a competitive position. But John has certainly put himself in a position where people will note what he's doing."

Friday's victory maintained Ulster's 100% record in Europe this season and took them six points clear at the top of Pool 3 ahead of Bath's visit to Clermont on Sunday.

Even if Ulster were to lose in Clermont in round 5,  they would still be expected to beat winless Bath at home and clinch a quarter-final spot.

"We've still got to go to Clermont but our destiny is in our control," admitted McFarland.

"We've got Clermont away and Bath at home and we consider those to be big and very difficult fixtures.

"But now we've got three weeks where we have some interpros to deal with. So it's not like everyone's switching off and going to sleep." 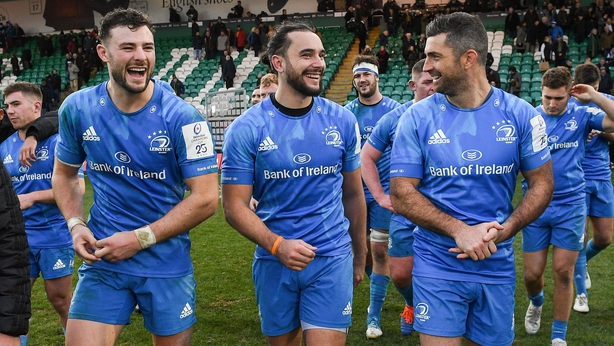 Before Ulster can turn their attentions to that January trip to France they must face all the other Irish provinces in the Pro 14.

First up is the daunting task of travelling to the RDS to face a Leinster team that have won every game they have played this season.

"They're the standout team in Europe and certainly in our league," said McFarland.

"They've already taken what was effectively a second team to Glasgow and beaten Glasgow's first team this year. So anybody playing whatever team they play will always have a big task.

"What they're doing at the moment has got to be admired."