Caelan Doris has more reason than most in Leinster ranks to be eyeing up this weekend's Heineken Champions Cup clash with Northampton at the Aviva Stadium.

Leo Cullen’s side put their unbeaten record this season in both competitions on the line this Saturday (kick-off 5.15pm) when they welcome the Premiership side looking to exact revenge for the sobering 43-16 reversal at the hands of the Irish province last weekend.

Leinster already look in pole position in Pool One, and victory over the Saints would put them in a strong position with games against Lyon (home) and Benetton (away) to follow.

Number 8 Doris has made a strong impression at the base of the scrum this season and played all but 75 minutes of comprehensive victory at Franklin’s Gardens.

The Mayo native has already started seven games this term – the 21-year-old started 11 games in total last season – and is likely to become an increasingly influential member of the squad.

With the festive fixture heading for a sell-out, Doris is hoping to be involved in what would be only his second appearance at Irish rugby headquarters in Leinster colours.

"I got a taste of the Aviva and the atmosphere in the European semi-final against Toulouse last year. I only got two minutes but it was pretty special two minutes," he told RTÉ Sport.

In just his third season as a pro, Doris has quickly come to appreciate this time of year on the rugby calendar.

"It’s a great place to be, especially these Heineken Cup weeks.

"The scoreline [last week] probably flattered us a little bit. We are not going to allow any complacent come in just because we won by 20 points

"I suppose Northampton will probably thrive off being underdogs going into this. They have quality throughout their side and created opportunities last weekend, but didn’t finish them." 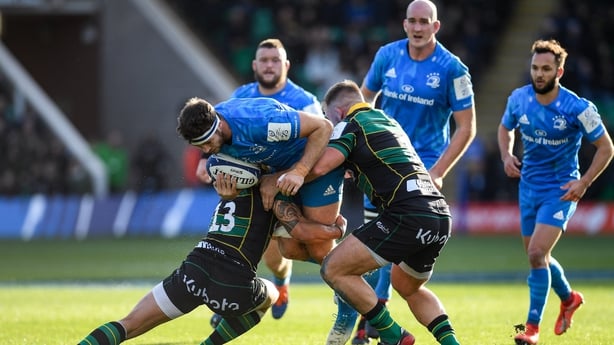 Cullen has almost an embarrassment of riches when his troops are all fit and ready, but Doris believes it is the team spirit which is the cornerstone of their winning start to the season.

The 23-10 win over Glasgow last month, the first win at Scotstoun Stadium in seven years, was indicative of the team’s ability to grind out a result as far as the number 8 is concerned.

"It was probably one of the most enjoyable wins I have been part of with Leinster," he said.

"The way we ground out the win, away from home in a pretty hostile environment. I think it was below zero as well so lads were working really hard for each other."