A joint statement from RA, NSWRU and Folau said the "post reflected Mr Folau's genuinely held religious beliefs, and Mr Folau did not intend to harm or offend any person when he uploaded the social media post".

It added: "Mr Folau wants all Australians to know that he does not condone discrimination of any kind against any person on the grounds of their sexuality and that he shares Rugby Australia's commitment to inclusiveness and diversity. "

Rugby Australia said it does "not in any way agree with the content of the social media post".

"Inclusiveness is one of rugby's core values and it welcomes all people to the game, including all members of the LGBTI community," the statement said.

RA said it had not intended to hurt the player's feelings, but "acknowledges and apologises for any hurt or harm caused to the Folaus".

The statement added that "Folau did not intend to hurt or harm the game of rugby and acknowledges and apologises for any hurt or harm caused.

"Rugby Australia and Mr Folau wish each other well for the future.

"The parties do not intend to comment further on the terms of their settlement as it is confidential." 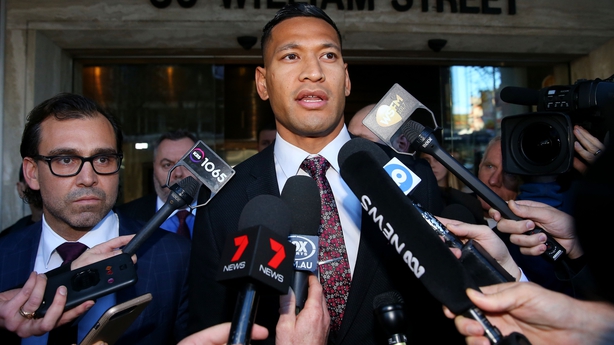 There was widespread condemnation of Folau's remarks when he made them, including from former Wallabies team-mate Drew Mitchell.

On his return to international rugby in 2015, Mitchell was a regular in the same back three as full-back Folau, playing alongside him in the World Cup final defeat by New Zealand that year.

"I think it's time for Israel to be moved on," Mitchell told foxsports.com.au.

Folau had taken the game's administrators to court seeking 10 million Australia dollars in damages, an apology and reinstatement from his former employers.

Folau, a devout Christian who preaches at a western Sydney church led by his father, had indicated a willingness to return to rugby league but the code's officials had blocked such a move.