The reigning Guinness Pro14 champions fielded a completely changed side from the one that beat Lyon in the Champions Cup last weekend for the renewal with last season’s beaten finalists.

The Conference A leaders had to play the opening stages with 14 men after Hugo Keenan was shown a yellow card but rallied back from 10-3 down with 20 unanswered points to claim their seventh win from seven games.

"It wasn’t perfect but there was some great fight out there," head coach Cullen told Leinster Rugby TV.

"We had a tricky start with Hugo going to the bin early but we managed to dig in.

"When we got up the field I thought the guys were really clinical in taking some chances.

"For the most part of the second half we played in the right areas of the field, it was a very controlled performance from the forwards and from Jamison Gibson-Park at 9 and Ross Byrne at 10.

"We had a couple of chances that we didn’t quite take but defensively I thought it was a great effort.

"We’re delighted to get a win."

Leinster’s next outing is a Champions Cup clash against Northampton Saints at Franklin’s Gardens on Saturday at 1pm. 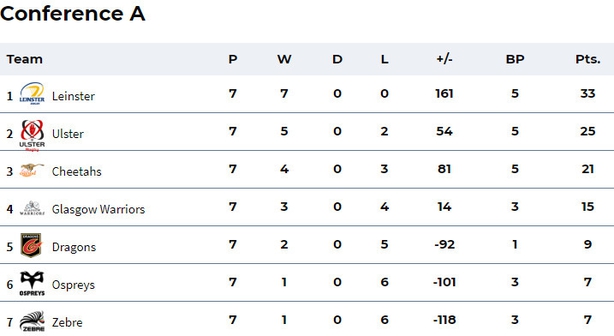