Ulster ran in five tries to claim a bonus-point 29-5 home victory over the Scarlets in the Guinness Pro14.

Cooney kicked two conversions in a game which only saw two scores in the second half after Ulster had led 24-0 at the interval.

Jac Morgan claimed the Scarlets' only try late in the game in what was just their second league defeat of the campaign.

The Irish province made a rapid start and had two tries in eight minutes.

First it was Faddes who touched down following Stuart McCloskey's kick through and then Cooney drove over from close range after Baloucoune was held up short.

Cooney uncharacteristically missed the first conversion from a fairly straightforward angle but then landed the second from the touchline to put Ulster 12-0 ahead. 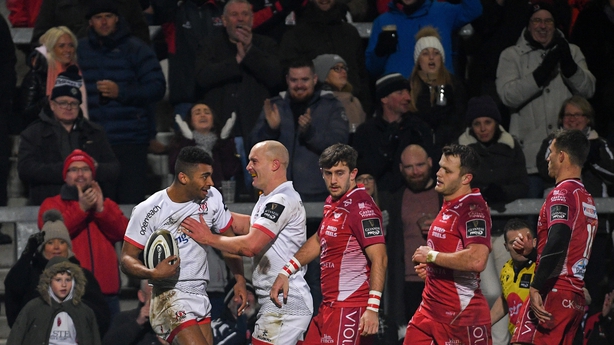 The scoreline then advanced to 19-0 after 17 minutes. This time, Rea was driven over from a maul and Cooney again converted.

The bonus-point try came three minutes before the half hour when Baloucoune got over in the right corner, but Cooney missed the extras.

Scarlets were then reduced to 14 men with a yellow card shown to flanker Uzair Cassiem, but Ulster failed to score anything at all during the sin-binning.

The second half brought some sense of revival from the Scarlets but that did not immediately translate into movement on the scoreboard.

With 10 minutes to go, Craig Gilroy was yellow-carded for a high tackle on Ryan Conbeer and then the Scarlets had a clear scoring chance only for Corey Baldwin to knock-on.

They did finally get on the board with a 74th-minute try from replacement Morgan, which went unconverted by Ryan Lamb.

But Ulster had the final say, with Faddes crossing for his second with two minutes left, although Angus Curtis missing the extras.