Munster head coach Johann Van Graan acknowledged the match could have gone either way after watching his side battle out a nail-biting 21-21 draw with Racing 92 at Thomond Park.

Racing looked well placed to become only the second French club in 32 attempts to win a Champions Cup match in Limerick when leading 21-14 inside the final 10 minutes.

However, a late try from Munster winger Andrew Conway, superbly converted from the touchline by fly-half JJ Hanrahan, ensured the game finished tied.

"From our point of view we are happy with the draw but we came here to win", Van Graan told RTÉ Sport.

"We had some of the best players in the world attacking you so you obviously don't want to concede but that was the way it was. I thought we scored some fantastic tries again. It’s two very good rugby teams. This was test match rugby at its best."

Hanrahan, who kicked 11 points in all, even had the chance to sneak an unlikely victory for the hosts at the death, but his drop-goal attempt flew left and wide.

The impressive French side scored three converted tries through talismanic number 10 Finn Russell, Teddy Thomas and Juan Imhoff, only for Munster - whose only other try was run in by Keith Earls close to half-time - to fight back. 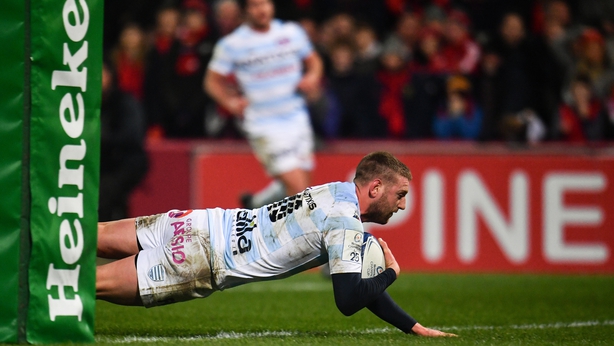 South African Van Graan said: "It was a very tough game of rugby, two heavyweight boxers who went at each other until literally the last second of the game.

"I thought Racing started pretty well, we came back, we had that chance when we were five metres short about 10 minutes before half-time. We scored on the stroke of half-time and I thought we played some very good rugby in the first half.

"There was a big breakdown battle, (we) fell behind in the second half, came back and I thought our bench made a big impact and we got ourselves back to 21-21 with that try and a brilliant conversion from JJ from the sideline.

"We fought back with an incredible kick from Earlsy to get that line-out and then to keep punching in a drop-goal position and unfortunately it went to the left. If that goes over, it's a different ball game.

"All credit to Racing as well, I thought both teams came to play some very positive rugby. It is like last year's draw in round one (against Exeter) - you could have lost it and you could have won it right there at the death. We will take our points and move on."

The result marked the third year in a row that Munster have recorded a win and a draw in their opening two pool fixtures.

Both sides had to be satisfied with taking two points from the heavyweight clash before the back-to-back phase of Pool Four, with Munster locking horns with holders Saracens next month and Racing facing the winless Ospreys.

The game was Simon Zebo's first outing against his native Munster since his move to Racing in summer 2018. Playing at full-back against his former team, the Corkman enjoyed the occasion and felt a draw was the right result.

Having been warmly received by the home crowd, Zebo told BT Sport: "The reception was incredible, as always. The Munster fans are up there with the best in the world. To come back here and play in the Racing colours, I was very proud.

"It was a very close game, so probably a deserved draw. I think we were a bit sloppy at times, one or two exits getting out of our own half. It's a very difficult place to come and be within such a grasp of winning the game. So we did ourselves proud - everyone gave 100%.

"It was a huge result for us. The other teams in the group will find it difficult to come away from here with anything. So we're happy with what we did. We can go back to Paris and be proud of ourselves."