A magical second half try from John Cooney helped Ulster to a well deserved 18-13 win over Clermont Auvergne at a wet and windy Kingspan Stadium in Belfast.

The scrum half was impressive throughout the match as he kicked a conversion and two penalties on his way to ending the night with 13 points.

The win moved Ulster to the top of Pool 3 after an opening two Heineken Champions Cup weekends saw them pick up two wins.

With the weather increasingly getting worse it was left to the 29-year old Cooney to brighten up events in the 62nd minute when he conjured a try out of nothing.

He broke free and chipped the ball over two Clermont players before kicking the ball on and getting ahead of Isaia Toeava for the all important score.

"It's one I’ve practised many times but have never pulled it off," he told RTÉ Sport. "I was coming back to my old football days getting the left peg in."

Despite the conditions it was Ulster that managed to make fewer handling errors on the night and something that Cooney said the team had talked about in the built up to the game.

"I think it was one for the purists today with that type of weather. It reminded me of Galway back in the day when I was in the Sportsground.

"At times it could have been better and we left it pretty tight there at the end but credit to our defence and winning them small moments.

"You have to put the other teams skills under pressure and it's something we have drove all week that if it was like that it was something that we had to do." 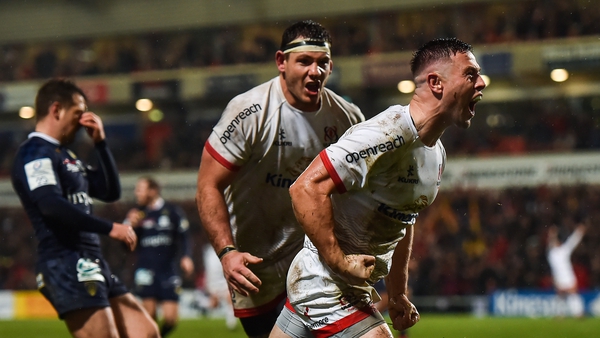