Saracens director of rugby Mark McCall has revealed he will not block his squad from playing for England in the Six Nations.

Eddie Jones expressed his concerns that England could feel the fallout from Saracens' salary cap breach with the club’s stars, six of whom started in the World Cup final, choosing to prioritise Premiership survival over representing their country.

Saracens, who on Monday confirmed they would not appeal their point deduction and €6.26million fine, are 26 points adrift of safety.

But McCall said: "I genuinely want our players to play for England. Of course I do, it’s the absolute pinnacle of the game.

Asked if he would speak to Jones, McCall replied: "Yes, but that always happens. To be clear, I support our players playing for England 100 per cent. I would encourage them to do that." 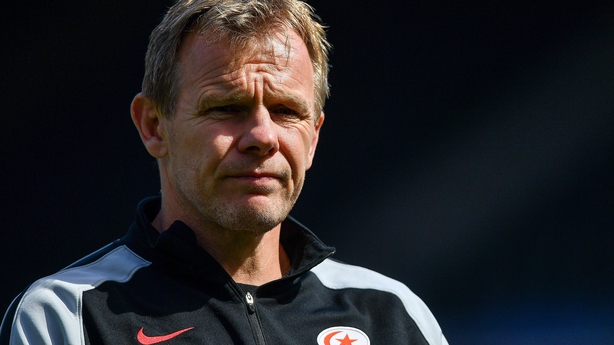 Mako and Billy Vunipola, hooker Jamie George, second row Maro Itoje, full-back Elliott Daly, who is yet to play for his new side since signing from Wasps, and fly-half Owen Farrell all started for England in the defeat against South Africa earlier this month. McCall said he has not spoken to any of them about Jones’ comments.

Saracens began their Champions Cup defence with a comprehensive 30-10 defeat at Racing 92 last weekend. They host Ospreys at Allianz Park on Saturday before returning to Premiership duty with a trip to Bath next Friday.

A number of Saracens’ England World Cup finalists returned to training on Wednesday, and will be available for selection this weekend.

McCall added: "The message to them was simple, and that is we are drawing a line under what has happened, especially with the decision on Monday(not to appeal).

"We are going to concentrate on the rugby and getting back to what we do well.

Saracens are holders of the Champions Cup, having triumphed in Europe in three of the last four years, and have taken the Premiership title for four of the last five seasons.

Their forthcoming relegation battle will be a new experience to most of the squad.

Alex Lewington was demoted with London Irish before joining Saracens.

"We have got some good enough leaders at this squad that they won’t be asking me to lead a relegation meeting," joked Lewington, 28.

"If Mark comes up to me and asks me to, I’ll do it for him, but I really don’t see it happening.

"There is no doubt staying up this year will be an incredible achievement. I read somewhere it is the harshest punishment in team sport so if we manage to do it then I guess we have set the bar."