The Paris outfit are Saturday’s visitors to Thomond Park (5.30pm) for the second round of the Heineken Champions Cup with both teams having starting their Pool 4 campaigns with victory.

Racing boast former Munster and Ireland players Simon Zebo and Donnacha Ryan among their squad, while ex-Munster scrum-half Mike Prendergast is the attack and backs coach for the Top 14 side.

Full-back Zebo came on as a late replacement in their win over Saracens, while lock Ryan started the game.

"I’m sure Zeebs will be passing on some tips. Teams study each other so well these days that [there’s] no secrets.

"They might have one or two things that we use that they might be able to share with the other lads but hopefully that doesn’t come back to bite us.

"We study each other really well, there is not much you don’t know about teams.

"It’s going to be on the day, a lot of things [need] to go your way so the two boys are part of a really good Racing squad, a lot of internationals and a lot of high-class players."

Johann van Graan’s men beat a weakened Ospreys last week, while Racing saw off a Saracens side missing most of its England internationals.

"It would be nice to open up with two wins," added scrum-half Murray, whose team host reigning champions Sarries on 7 December.

"There are top quality sides in this group. We knew it was going to be tight." 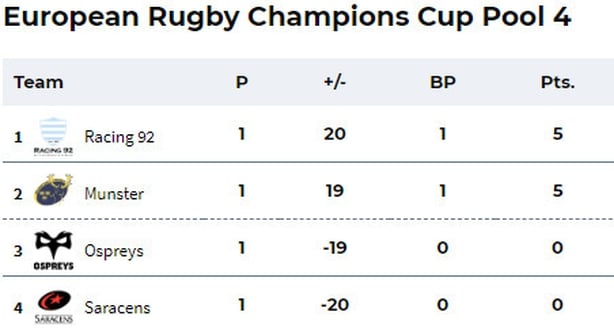