Munster opened their Heineken Champions Cup campaign with a 32-13 bonus-point victory over Ospreys at the Liberty Stadium.

Tries from Jeremy Loughman, Keith Earls, Andrew Conway and James Cronin - at the death - along with 12 points from the boot of Tyler Bleyendaal was enough to get Munster over the line.

All the Ospreys could muster was a late try from Aled Davies, with Luke Price and James Hook kicking eight points between them.

Price opened the scoring with a successful penalty attempt after Munster were penalised at the scrum. But Munster began to build some pressure with and very nearly scored when Bleyendaal worked an overlap only, for Mike Haley to knock the ball forward with nobody in front of him. 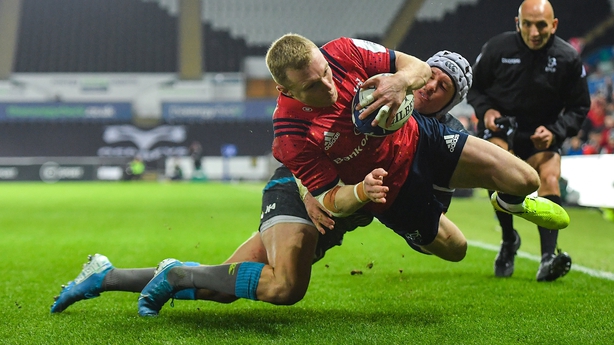 But Bleyendaal kicked Munster ahead as the Ospreys were forced to make a lot of tackles. Price levelled the scores but Munster finally turned pressure into points with Loughman powering his way over from short range.

The try wasn't initially awarded with television replays showing Conor Murray may have spilled the ball forward. But the television footage proved inconclusive and the try stood. Bleyendaal converted to give the visitors a 13-6 lead at half-time.

Munster carried on from where they left off in the early stages of the second-half with the Ospreys forwards unable to match the home sides dynamic ball carriers.

The visiting forwards went through the phases before the ball was spun wide for Earls to sneak in at the corner.

Earls try was referred to the television match official due to Hanno Dirksen's brave tackle but the replays proved the wingers' foot had not been in touch.

Ospreys hooker Scott Otten cheaply surrendered possession from the restart which put the result beyond the hosts. The ball fell into the hands of Loughman who put Conway into the clear with the Ireland international running in unopposed from 55 metres out. 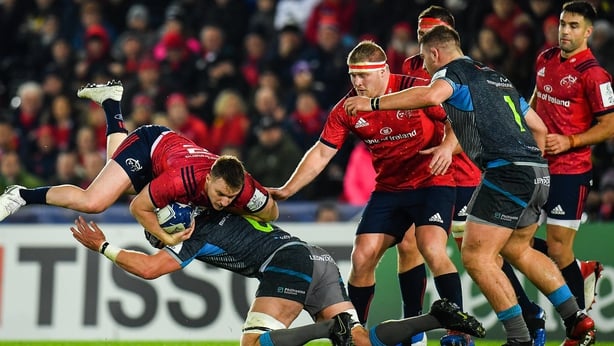 Bleyendaal was successful with the conversion and Munster went in search of a try-scoring bonus point. But to their immense credit, the Ospreys refused to throw in the towel with Wales internationals Nicky Smith, Aled Davies, Bradley Davies and Adam Beard a welcome sight from the replacements bench.

And Davies grabbed a late consolation try for the hosts as Munster were caught napping when he took a quickly tapped penalty. Former British and Irish Lions utility back Hook converted but Munster finished the game by laying siege to the Ospreys line.

The province were awarded a penalty and went for the corner. In what was the last play of the match, Cronin powered his way over the line off the back of a driving lineout to secure all five points for the visitors.