English and European champions Saracens have been docked 35 points and fined more than £5million, pending appeal, over breaches of salary cap rules.

Here are the questions arising from the ruling.

Why does the sport have a salary cap and how big is it?

Premiership Rugby, which manages the top league in the English club game, introduced the salary cap in 1999 with the twin aims of ensuring a level playing field and maintaining a competitive, growing and financially sustainable league, ie preventing the clubs from the pitfalls of over-spending.

The cap was increased from £6.5m to £7m ahead of the 2017-18 season and will remain at this level until the end of the 2019-20 season. The ceiling includes dispensation for academy and injured players and effectively raises the possible spend to around £9m.

What exactly have Saracens done?

Premiership Rugby responded to allegations of a salary cap breach by carrying out an investigation which took nine months. An independent panel was then appointed in June by dispute service, Sport Resolutions, and on Tuesday it ruled that Saracens failed to disclose payments to players in each of the last three seasons. It concluded that the club also exceeded the ceiling for payments to senior players in that time.

No details have been revealed on the size of the undisclosed payments or the recipients but Premiership Rugby's investigations were thought to have centred around owner Nigel Wray's involvements in companies such as VunProp Ltd (Mako and Billy Vunipola), Faz Investments Ltd (Owen Farrell), Wiggy9 Ltd (Richard Wigglesworth) and MN Property Solutions Ltd (Maro Itoje).

Wray has in the past argued that 'investment is not salary' and likened the arrangements to his public support of coffee and brewing companies set up by players.

A statement issued when the allegations came to light said: "A professional playing career in rugby can be short. We have a responsibility to help our players fulfil their potential, not just on the pitch but off it too." 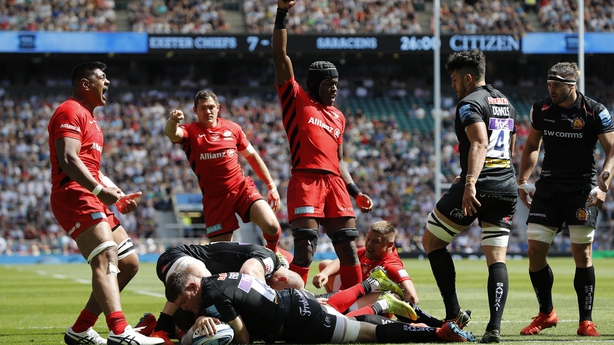 How does the punishment compare with any previous breaches?

For years there have been rumours of clubs breaking the cap in a big way - in 2015 eight of the top-flight clubs took the unusual step of publicly announcing they had not been investigated for potential breaches - but nothing was proven until now.

In February Harlequins were fined £6,239.50 after exceeding the Premiership's salary cap in the 2017-18 season. They were £12,479 over the £7m limit but Premiership Rugby said there was no suggestion the breach was deliberate and the club were docked 50p per £1 overspent in accordance with competition regulations.

Can Saracens appeal the decision?

The club have already said they intend to appeal against all the findings and the case is set to go to Sports Resolutions.

Saracens would have had 21 days to pay the fine in full but the appeal means the sanctions will be suspended pending the outcome of their appeal.