Munster moved to the top of Guinness Pro14 Conference B with a convincing 33-23 victory over Cardiff Blues at the Arms Park.

The visitors outscored their opponents by four tries to two to send Blues to their fourth league defeat in a row.

That record leaves Cardiff 11 points behind Scarlets in the third play-off place, leaving them with much to do if they are to retrieve their season.

Corey Domachowski and Nick Williams touched down for Blues' tries while Jarrod Evans chipped in with three penalties and a conversion. Jason Tovey also added a conversion.

Cardiff took a seventh-minute lead when Evans fired over a penalty after the visitors had infringed at a scrum. 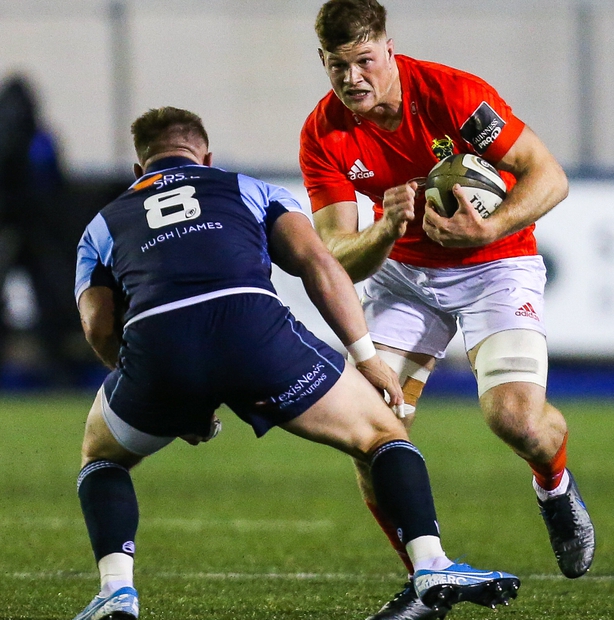 With the wind in their faces, Munster were forced to run the ball at almost every opportunity and a powerful burst from Calvin Nash took them into the home 22, where Hanrahan tied up the scores with a penalty.

They were not level for long, though, as straight from the restart the Irish were penalised, allowing Evans to put the hosts back in front.

However, Munster continued to trouble the Blues defence, with Darren O'Shea and Arno Botha combining skilfully to punch a hole in it before Matthew Morgan managed to drag down the latter to prevent a certain try.

It mattered little as minutes later O'Shea and Jeremy Loughman made holes in a porous defence for Cloete to force his way over.

Hanrahan converted and added a penalty as his side continued to dominate with their expert ball retention in the difficult conditions, but Cardiff struck back when Domachowski rewarded a sustained period of pressure by forcing his way over to make it 13-13 at the interval.

Your Guinness Man of the Match: @JjHanrahan 👏

After the restart, Blues continued their rally and were rewarded with a third penalty from Evans, but the visitors again demonstrated their superb handling skills when Kevin O'Byrne and Botha set up a try for Mathewson.

Mathewson then turned provider with a neat pass sending Nash over and Blues looked in trouble trailing 25-16 going into the final quarter.

Munster saved the best for last when a superb run from replacement Rory Scannell saw him supported by Mathewson and Dan Goggin before Mathewson was on hand to collect the scoring pass.

Hanrahan missed the conversion but succeeded with a late penalty before a try from Nick Williams gave Blues some respectability.