Adam Byrne and Cian Kelleher have been selected to start as Leinster return to Pro 14 action taking on Zebre in Italy.

The Dublin-based side will be looking to make it four from four in this season's campaign and head coach Leo Cullen has made some changes from the side that accounted for Edinburgh in Round 3.

Hugo Keenan continues at full back after his impressive start to the season, but there are two changes on the wings with Byrne coming in on the right and Kelleher making his first start of the season.

Kelleher is involved in a matchday squad for the first time since his return to the club from Connacht.

Joe Tomane and Rory O'Loughlin continue their partnership in the centre, as do Jamison Gibson-Park and Ross Byrne at half back.

Peter Dooley and Michael Bent are the starting props once again with James Tracy making his first start of the season at hooker.

Ross Molony comes into the second row and starts alongside captain Scott Fardy.

In the back row, Josh Murphy starts at blindside with Scott Penny at openside and Max Deegan at number eight.

On the bench Bryan Byrne and Ryan Baird are involved for the first time this season.

Head coach Andy Friend has made four changes to the Connacht starting team from the side that recorded a bonus-point win over Dragons two weeks ago.

With Tiernan O'Halloran and Paddy McAllister out of action until December, Connacht have had to reshuffle slightly, but Darragh Leader has returned from a leg injury to take his place on the bench.

Stephen Fitzgerald comes straight into the side at fullback for the injured O’Halloran and is part of a new-look back three that sees Niyi Adeolokun and John Porch on the wings.

Fitzgerald’s brother Conor is retained at out-half following his impressive start to the season, and he forms a half-back partnership with Kieran Marmion. 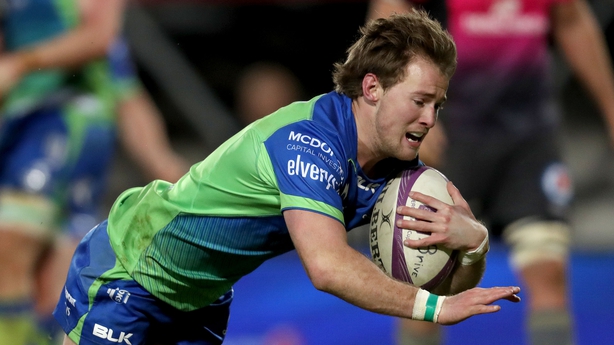 The midfield remains unchanged with Peter Robb and Kyle Godwin continuing their partnership. Loosehead Denis Buckley comes back into the side for his first start of the season, alongside hooker Tom McCartney and Finlay Bealham at tighthead.

The second row sees Gavin Thornbury and Quinn Roux together for the fourth straight game, while the back row also has a familiar look to it with captain Jarrad Butler at openside, Eoghan Masterson at blindside and Paul Boyle occupying the number eight jersey.

Connacht face a Cheetahs side that have been hugely impressive in their opening games with three bonus-point wins recorded in Bloemfontein.

This impressive form is something that Friend says his side will be well prepared for: "The Cheetahs have been impressive in their opening three games and have three bonus points on the board so we will have to be at our best against them.

"But we have a had a really good start to the season as well, with two wins from our opening three games so fans can expect an exciting game on Saturday evening.

"Unfortunately, we have to plan without Tiernan O’Halloran and Paddy McAllister until December but I have always said that this block of thirteen games in a row was going to require real depth in our squad.

"We have picked a matchday 23 targeting a home win."

Munster have made five changes to their team ahead of Friday's home game against Ospreys, with academy prospect Jack O'Sullivan being handed his first start in the back row.

Head coach Johann Van Graan has tinkered around with his personnel after his team's 40-16 reversal against the in-form Cheetahs in Bloemfontein a fortnight ago.

Alongside O'Sullivan, Calvin Nash, Neil Cronin and James Cronin return to the team.

Munster have won two from three at the beginning of the 2019-20 season, demolishing Dragons and seeing off Southern Kings before being blitzed by the impressive Cheetahs last time out.

Will Addison makes his first start of the season as Ulster host Cardiff Blues at the Kingspan Stadium on Friday night (7.35pm).

The Ireland full back returns to a team which shows five changes from the side which demolished Southern Kings in Port Elizabeth a fortnight ago.

21-year old Belfast centre James Hume is the only other change in the backline and he returns to partner Luke Marshall in midfield, replacing Stuart McCloskey.

The other three changes are in the tight five, with Jack McGrath and John Andrew returning in the front row while Kieran Treadwell replaces Sam Cartner to partner Alan O'Connor in the second row.

Dan McFarland's team have won two of their first three games, with a heavy and chastening defeat to Cheetahs being sandwiched between victories over Ospreys and Southern Kings.