Ireland have qualified for the quarter-finals as expected after their 47-5 win over Samoa on Saturday.

After a shock defeat against Japan, most Irish people and especially the players will be glad to put the pool stages behind them.

The expectation of reaching a quarter-final and the fact that we are still unsure about how much this squad can achieve made the last few weeks feel like they were dragging along, but our fate is now known and it is all about trying to get the relevant information to the players to prepare for what is sure to be their biggest task to date as rugby players.

Ireland will have reasons to be confident, following their win over the weekend.

They had to battle through adversity for more than 50 minutes following Bundee Aki's red card for a high tackle. There can be no complaints from Ireland’s point of view regarding the colour of the card but they have been doing their best and will continue to do so to free Aki to play against the All Blacks next week. 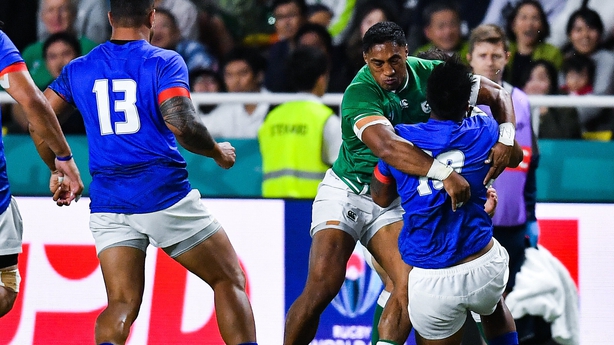 Despite playing with 14 men, Ireland only looked uncomfortable for a few minutes after the incident when Samoa upped the pace of the game with quick lineouts and a few zig-zagging runs from Tim Nanai Williams.

Other than that, Ireland were in full control, which I’m sure is the way they set out to win the game.

They were helped by some very poor discipline from the tournament’s least disciplined team.

Samoa received two separate yellow cards and gave away numerous penalties that let Ireland off the hook and gifted them entries into the Samoan half of the pitch, a few of which resulted in Irish scores.

Samoa conceded 17 penalties in total throughout the game, six of these were in the opposition half, which would suggest that they weren’t pressure penalties.

Ireland only conceded five penalties throughout the whole game which is expected of tier one teams if they are to go on to win tight matches.

Ireland didn’t play a very expansive game. After trying to do so in their defeat against Japan, it looks like they have very much gone back to basics and to a style of rugby that suits them. They like to know where the next ruck is going to be and who will be cleaning it so that others get guaranteed ball to attack with.

This squeezes the other team and starves them of possession until they make a defensive error or until they retreat far enough for Ireland to capitalise and take some scores.

To be fair to Ireland, there was a bit of spark at times, with multiple offloads before they controlled the possession a bit more, but there were also a few loose moments.

One of these was a loose pass from a rusty Robbie Henshaw in the build-up to Bundee Aki’s high tackle.

Two other standout loose moments were before Stockdale was hit high for Lam’s yellow card early on in the game.

James Ryan had overrun a Conor Murray pass and if it weren’t for the earlier high shot, Ireland would have been defending a cheap scrum situation on their own 22m line.

Another was when Henshaw was hit early following a messy wraparound play that they normally execute so clinically.

It seems like Ireland aren’t as comfortable going wide at the moment, which is fine when you’re playing against tier two nations, but it might not be enough to see them progress past the quarter-final stage.

One of the biggest positives to come from the game was that the half-back pairing were back to their influential best.

Murray’s kicking game transferred pressure and earned Ireland a lot of territory. Sexton was on the end of two tries and looked very comfortable to be back running the show. If Ireland are to build on this momentum, these two guys are key to their success and will need to be back to their world class levels to help the team along.

Larmour paid Joe Schmidt back after trusting him over Andrew Conway, with a player of the match performance.

Unfortunately, I still don’t think it’s going to earn him a starting place over Rob Kearney because Kearney has been vital to Ireland in many of their biggest Test wins in recent times.

It could earn Larmour a spot on the bench next week at the expense of Conway, despite Conway crossing for a try in the second half of Saturday’s match.

Furlong had an abrasive performance, Peter O’ Mahony came on for a textbook turnover at a critical time and Ireland’s injury concerns in Carbery and Henshaw got through their own game time without any known complications.

All in all, the sum of all the parts are adding up quite nicely for Ireland, facing into an intense week ahead.

I still think we don’t know what is to come from Ireland.

Big-game momentum certainly isn’t on their side, but they have created something after dispatching their last two below-par opponents.

After Scotland’s performance against Japan the Irish defeat is making a lot more sense. It’s hard to pin point how Japan do so much damage but their attacking breakdown and ability to complete the basics with ease offer some answers to the conundrum. Ireland were the first team to be caught by them so the defeat was amplified. In saying that, New Zealand have been playing like that for as long as we can remember, so it won’t get any easier next weekend.

It’s going to be a big week for Joe Schmidt and his team if they are to go further than any other Irish team in this competition.

It’s definitely an uphill task, but the confidence is growing slowly, and we’ll wait and see how the coming week plays out.