Joe Schmidt has tipped Cian Healy to prove a big point in Saturday's World Cup clash against Japan after the hosts accused the Ireland prop of illegal scrummaging.

Japan prop Yusuke Kizu claimed Healy "steps out" and illegally angles in at scrummages - a suggestion that has found no favour with Ireland head coach Schmidt.

The Ireland boss insisted his team does not flout rules at scrum time, pointing to their exemplary disciplinary record at the set-piece.

And Schmidt then went on to predict that Healy will use the criticism to his advantage, with the Lions star named in Ireland's line-up for the Shizuoka encounter.

Asked for a response to Kizu's comments, Schmidt said: "It's hard to step out when you've got your right shoulder out and you're nice and square.

"We'd be probably one of the - if not the - least penalised scrums in international rugby.

"We do our very best to scrum square, we don't step left.

"Sometimes it's impossible not to step left if the opposition does it.

"If the axis is moved by the opposition, it's pretty much impossible not to move your left foot.

"Certainly what was said by Kizu was a big surprise for us, and will probably provide a bit of motivation for Cian on Saturday." 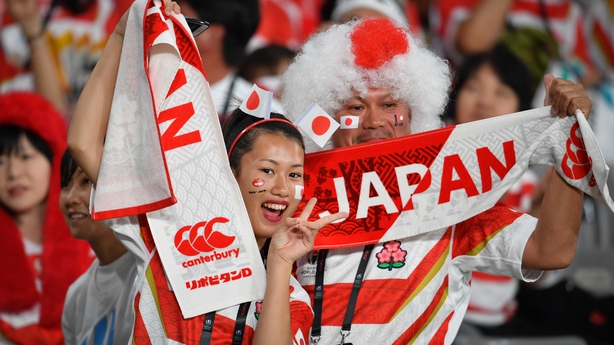 Defence coach Andy Farrell insisted Ireland must be wary of the boost Japan will receive from their home support.

Japan admitted the size of the occasion of hosting the opener against Russia caught them off guard last week, with a colourful opening ceremony preceding a patchy 30-10 victory.

But Farrell - who coached England at their home World Cup in 2015 - insisted Japan will not fall foul of the atmosphere again.

"One hundred per cent they will handle it better this time," said Farrell.

"It's always nice to get 80 minutes under your belt, especially kicking off a home World Cup that you're building towards for four years.

"I suppose now they've got that under their belt they'd be itching to get back out there, with a longer turnaround than ourselves.

"They want to put their best performance out there, they don't want to die wondering, they think this is a huge occasion for them.

"And we are probably aware of that mentality and what this game means to them, and we've got to act accordingly to that."