British and Irish Lions fly-half Sexton did not train fully on Tuesday due to the thigh knock he sustained in Ireland's stunning 27-3 victory over Scotland in Yokohama.

Skills coach Richie Murphy insisted it "wouldn't be unusual" for Sexton to sit out part of a session two days after a Test match, and Ireland expect him to join in full training on Thursday.

But even if the 34-year-old is available for Saturday's Shizuoka encounter, head coach Joe Schmidt could opt to keep him under wraps.

Fit-again Carbery needs rugby for match sharpness having missed the Scotland clash with the after-effects of his six-week knee injury.

"Johnny went through rehab today, but he had also done some work with the team; but he's being monitored," said Murphy.

"We expect him to train fully on Thursday. That wouldn't be unusual for him not to train two days after a Test match.

"Johnny just got a bit of a bang on the leg (against Scotland). He just didn't feel comfortable to kick during the game so we have no problem passing over the duties."

Carbery, Keith Earls and Rob Kearney are all fit again having missed the bonus-point Scotland win.

Earls has recovered from his thigh issue and Kearney from his calf complaint so could slot into the line-up as Ireland will rotate resources, though cautiously given their wariness of facing the tournament hosts. 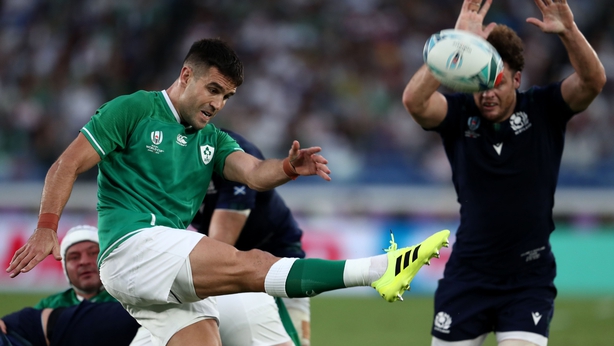 Conor Murray took over the kicking duties once Sexton had suffered the thigh niggle on Sunday, but Carbery would strike off the tee if paired up with his Munster half-back partner against Japan.

"Joey would be our more recognised goal-kicker so he would be next in line (behind Sexton)," said Murphy.

"We'd be happy with any of them but our three 10s are the guys who kick more for their provinces.

"They're the guys that are probably our frontline goal-kickers.

"Conor is a very accomplished kicker. He hasn't had to do it very often but he has a good process, he practises regularly and he's happy to take that responsibility, so we're happy to give it to him when that case arises."

"Those three guys from last week have made really good progress. Even by the end of last week they were ready to play.

"We didn't feel like it was the right thing to put them in with the fact we had other players in the 31-man squad that we were happy with and knew that could do a job for us."

Ireland can move a long way towards a quarter-final with victory over Japan on Saturday, but Murphy insisted Schmidt's men were taking nothing for granted despite the hosts being ranked just ninth in the world.

Ireland are likely to mix up selection to face the Brave Blossoms, but Murphy insisted changes were not expected to be wholesale.

"The first thing is we've a lot of respect for Japan. They are a very, very good side and they've proven that over the last couple of years," said Murphy.

"There could be some rotation in it but it will be fully focused on beating Japan."

Peter O'Mahony and Bundee Aki have passed all their head injury checks and returned to training on Tuesday, leaving the experienced duo available to face Japan.

Robbie Henshaw remains a long shot for the Japan game however, as he continues to shake off a hamstring problem sustained in training since arriving in Japan.

"Pete and Bundee have come through well today," said Murphy. "Bundee and Pete both passed HIA three which means they are fit to return to training which they have done today."