Stuart Hogg insists Scotland can still make a success of the World Cup, but admits they will have to learn from their mauling by Ireland in Yokohama.

Gregor Townsend's team made a dismal start to their Pool A campaign as they crashed to a 27-3 defeat to the world's number-one ranked side.

It was an abject display that has deflated the Scots' pre-tournament optimism.

But full-back Hogg, whose side are likely to find themselves on a quarter-final collision course with reigning champions New Zealand if they make it out the group, still believes the Dark Blues can go deep into the competition.

"Absolutely," said the new Exeter signing when asked if he thought Scotland still had a chance of going far.

"If we're being brutally honest we let ourselves down in the first 20 minutes and gave Ireland three tries. We made a lot of mistakes but we'll learn from it and move on.

"We played into Ireland's hands. We allowed them to come to us and we didn't really take the challenge to them.

"Against a team like Ireland you can't cough up cheap ball and make silly mistakes, because you're going to be on the receiving end of points. Their first three tries came from our errors and our ill-discipline.

"But we have the quality, the character, the coaching staff and the players to be a successful side.

"I keep touching on it that we're frustrated, but there's another challenge next weekend against Samoa that we need to prepare for.

"A week in Test match rugby when you're winning is a short time, but when you're losing it's a long, long time.

"However, there's a lot of opportunities to make amends."

Hogg was among a number of players in Townsend's squad who insisted last week they were aiming to go all the way in Japan. 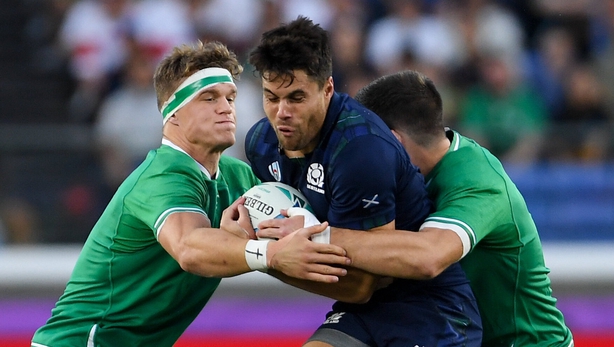 But there was little to suggest they will end up being genuine contenders as they gifted Joe Schmidt's team victory with their showing in the opening 25 minutes.

Gregor Townsend admits Scotland are now in must-win territory ahead of their final three pool matches, starting against Samoa in Kobe a week on Monday.

And Hogg says Scotland must respond to the set-back.

He said: "I've not been involved in a Scotland camp that's had this good a preparation. To start the way we started is bitterly disappointing.

"For us now it's about making sure we learn from this and we're in the best place possible to come next weekend.

"We can't mope. It's frustrating, it's disappointing and we're all downbeat just now.

"But come tomorrow morning, we'll review this and make sure we're in a better place afterwards.

"We need to learn individually and collectively and make sure we're in the best place to win a Test match against a physical and quick Samoa team.

"We want to play the fastest rugby in the world but we're not going to change for anybody."