Rugby's clampdown on high tackles is changing the approach to the breakdown, swinging the advantage to ball-stealers and, say players and coaches, making the "jackal" an even more essential weapon for any World Cup pretender.

The battle for the ball at the breakdown - what happens in the immediate aftermath of a tackle - has always been a fundamental part of the sport but increasing player welfare concerns are now subtly changing that critical theatre of operations.

The sport's governing body says there has been no change in emphasis on refereeing other than the now well-established bid to eliminate high and dangerous contact in all areas of the game.

In practical terms, what that means is that players are more likely to be penalised if they smash into a ruck recklessly or use a "neck roll" to dislodge an opponent, with the result that the game is now seeing fewer "no arms" clearouts.

This was clearly illustrated with the red card shown to New Zealand lock Scott Barrett for his shoulder charge into Australia flanker Michael Hooper in a ruck last month - an approach that would have usually gone unpunished in the past but which will not be tolerated at the World Cup in Japan.

Consequently, the ever-shifting rugby laws advantage has swung back in favour of the "jackler"  - the player who plants himself above the tackled player and attempts to reach and claim the ball in the face of a concerted attempt from the tackled player's team mates to smash him backwards.

The extra protection he is now afforded means he is harder to dislodge and is more likely to claim the ball or force a penalty for not releasing.

With turnover ball being the holy grail of the game at test level, the upshot is that coaches are already trying to adapt to the change via their back row selections.

Australia's effective combination of David Pocock and Michael Hooper was the template for playing two hard-to-shift sevens, and others, including New Zealand and Wales have tried it and are likely to follow that path in at least some of their fixtures in Japan. 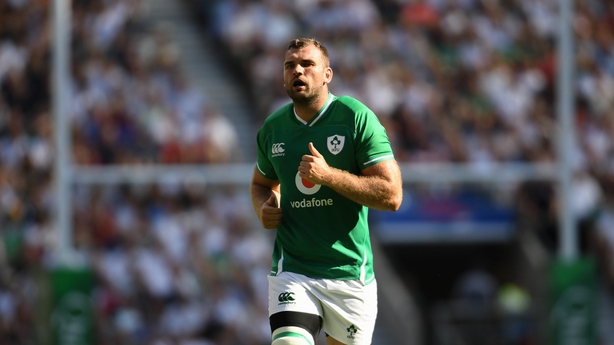 "What I see is a change in the way the game is being refereed," Jones said ahead of the game which England won by a record margin.

"There is a lot more contest in the breakdown. The tackler is being allowed to stay in the tackle which means the ability to poach has increased. It is good news because the way the laws are being interpreted at the moment allows for a strong contest. "What we want to be able to do is pick teams who can cope with this, if it's going to be two people over the ball every breakdown. We want to be able to do the same thing."

For many players, however, the whole discussion about horses for courses selection is becoming increasingly irrelevant.

"In the modern-day game everyone is expected to do everything - tackle, carry, be good on the ball, be good over the ball - it's really just a number on a shirt now," Underhill said when asked about the six/seven distinction.

"You've got second rows that can jackal and hookers that can put little kicks through. The world has gone pretty crazy. I think that kind of plays into playing two traditional sevens. That’s a position where you are expected to do everything anyway, I think that is kind of where the game is going."

World Rugby's stance is that there has been no change in refereeing emphasis other than the introduction of the "high tackle sanction framework."

"All coaches have had productive meetings with World Rugby High Performance Manager Alain Rolland or former international referees Chris Pollock and John Lacey to run through the focus areas that have operated in the international game for some time," a spokesman told Reuters.

Addressing the issue in Japan this week, the governing body's president Bill Beaumont said: "We're confident there will be collaboration between players, referees and coaches. The situation regarding the high tackle has been well received by the rugby public. Player safety is very much the top of our agenda."

Officials at the World Cup - those on the pitch and the TMO - will also have the benefit of multiple angles for replays of incidents they want to investigate for possible sanction - not something always available in other competitions.

"The coaches may not agree with all the decisions made, but there's good understanding of the reasons behind those decisions," World Rugby CEO Brett Gosper said on Tuesday.

"This is the best-prepared group of match officials we've ever had and they'll be supported by so much technology. Everything's in place for as much consistency as possible."