South Africa coach Rassie Erasmus made just one change from the starting side that drew with New Zealand in July when he named his team for Saturday's crunch Rugby World Cup clash with the world champions in Yokohama.

Siya Kolisi, who missed the 16-16 Wellington draw because of injury, will captain the side at openside flanker in place of Kwagga Smith to make up an imposing back row with number eight Duane Vermeulen and blindside Pieter Steph du Toit.

Otherwise, Erasmus has stuck with the side that last played the All Blacks for a match that is likely to decide who wins Pool B and enjoys the potentially relatively easier path through to the final.

The matchday squad was identical to the one Erasmus put out for the 41-7 victory over Japan in Kumagaya this month that kept the Springboks unbeaten this year.

"We've found some consistency and some momentum in a number of ways this season and one of them is in selection," Erasmus said. 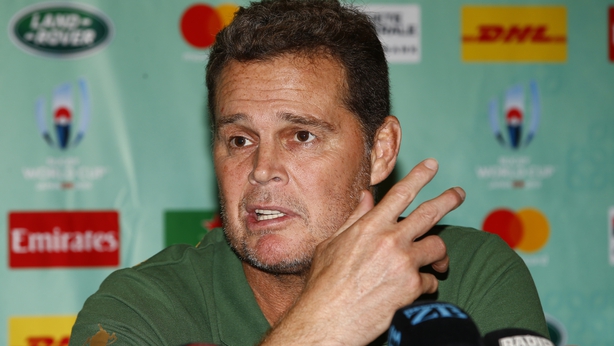 "We have 31 players in the squad, any of whom I would be happy to select ... but this is a line-up that has worked well as a starting combination and one with real momentum to come from the bench.

"We're continuing to develop and new players are always pushing a claim but we’ve prepared well and we’re looking forward to what will be another extremely close match."

There was no place for Smith or Nkosi on the bench with Francois Louw covering the back row and Jesse Kriel the back three.

The versatile 32-year-old Frans Steyn will cover the centres and act as back-up to starting flyhalf Handre Pollard with Elton Jantjies missing out altogether despite starting tests against Argentina and Australia in the number 10 shirt this year.