Japan captain Michael Leitch is a man who welcomes pressure and believes he performs best under it, which is a good thing considering the weight of expectation on his considerable shoulders going into a World Cup on home soil.

Leitch, who moved to Japan from New Zealand aged 15, has been the Brave Blossoms captain since 2014 and is clearly the main man in Jamie Joseph's squad, setting the tone on and off the field.

Leitch believes the key area of improvement in Japanese rugby under his stewardship has been in changing the squad’s mentality and demanding that the players see themselves as potential tournament winners.

It means being able to handle the pressure, one of Leitch's favourite words.

"I love pressure," Leitch said, who'll lead his side into Pool A battle with Ireland in Fukuroi on 28 September.

"It almost gets to the point where you are a pressure junkie where you want to be pressured."

Consequently, Leitch has not been shy of inviting yet more pressure on himself, regularly delivering fierce statements of ambition when assessing Japan’s chances at the World Cup.

"I think you need to be very brave in what you say; we want to make the quarter-finals but ideally, we want to win the World Cup," he said.

"So I guess we are going to have to try and win the World Cup and see how far we can get." 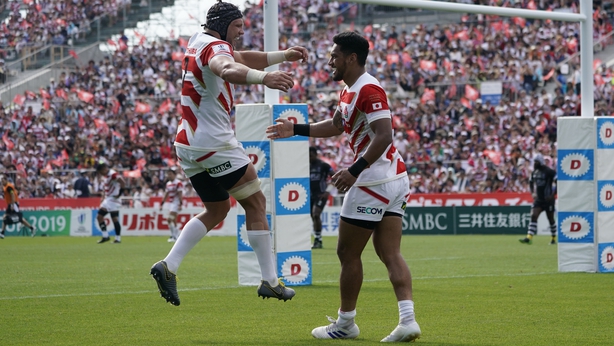 That might be a bold ambition for a side who have never progressed from the World Cup pool stages at eight times of asking but in Leitch, Japan have a formidable leader.

"When he plays for Japan it is a different team because he has just got that ability to lead through not only his actions but also his words," former Japan coach Eddie Jones, who is leading England's World Cup campaign, said of Leitch during a visit to Tokyo in April.

"He has a really magnifying effect on that team, which shows you the power of good leadership."

The 30-year-old flanker also has a habit of scoring important tries for his country, most notably during Japan’s famous World Cup victory over South Africa in Brighton four years ago.

Leitch scored two more in the 34-20 victory over the United States last month which secured Japan the Pacific Nations Cup title and he is not short on confidence heading into the World Cup.

"The only reason we would ever lose a match would be because we couldn't execute what we aimed to do," Leitch said.

"I don't imagine us losing because the opponent is stronger than us."