David Pocock made a successful return as the Wallabies bid farewell to Australia with a hardfought 34-15 victory over Samoa at Western Sydney Stadium on Saturday in their final match before the Rugby World Cup.

Flanker Pocock, sidelined by injury for most of the year and playing his first match since 8 March, captained the home side in place of the rested Michael Hooper and managed 58 minutes before making way for fresh legs.

The twice world champions were 22-3 in front at halftime with Pocock having provided the pass for lock Adam Coleman to score the first of Australia's six tries in the eighth minute.

Winger Marika Koroibete, who looked dangerous throughout, scored the pick of those scores when he rampaged past four defenders in the 16th minute, with centre Adam Ashley-Cooper and flanker Lukhan Salakaia-Loto also crossing before halftime.

Samoa hit back after the break with Dwayne Polataivao scoring both of their tries but winger Dane Haylett-Petty and centre Matt To'omua crossed in the last 10 minutes to see the hosts safely to victory.

"It was a tough one, lots of big hits. But it was good to be back out there, very enjoyable," said Pocock.

"There's plenty to work on there, I thought some of our shape was really good but it did get a bit stop-start at times, they put us under pressure and there's a couple of things at scrum time we'll work on." 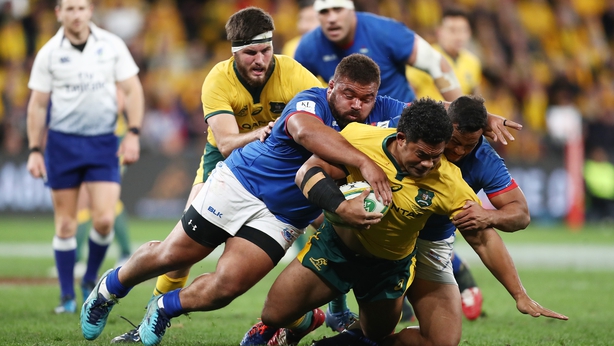 Samoa briefly threatened a repeat of the upset they achieved in their last match against the Wallabies in Sydney in 2011 with their resurgence in the second half after the first had ended with an unfortunate injury.

Starting scrumhalf Scott Malolua had a test debut to forget, dislocating his shoulder in a tryline ruck to put his participation in the World Cup in serious doubt.

His replacement Polataivao made an immediate impact, though, scoring his first try in the 53rd minute after the Pacific islanders had dominated an attacking scrum and the second eight minutes later following a line-break from centre Reynold Lee-Lo.

"It was a tough first half, we gave up four tries through mistakes and a quality side like Australia are going to capitalise," said Manu Samoa skipper Tusi Pisi.

"The boys have worked really hard over the last month and hopefully we can put in some good performances at the World Cup."

Australia came through relatively unscathed on the injury front although there will be some concern at Coleman leaving the field with what looked like a thumb problem after 56 minutes.

Coach Michael Cheika, who led Australia to the final four years ago in England, will take reassurance from the fact that he fielded a side very different from that expected to start the World Cup opener against Fiji in Sapporo on 21 September.

The Wallabies also face Wales, Uruguay and Georgia in Pool D, while Samoa are in Pool A with hosts Japan, Ireland, Scotland and Russia.