Samoa coach Steve Jackson has promised plenty of big hits and running rugby when the Pacific islanders take on Australia on Saturday in a final World Cup warm-up match he believes is vital to his team's confidence before they head off to Japan.

The Samoans, Ireland's final Pool A opponents, beat up the Wallabies in a famous upset in their last meeting with the twice world champions in July 2011 and Jackson said his players would not be holding anything back at Western Sydney Stadium.

"It's an opportunity for our players to play against a tier one nation and it's critical for our build up for Rugby World Cup that we go out there and put on a good performance and build some confidence for ourselves.

"There's some things that we need to work on from last week's games and which we've addressed, and hopefully the weather will stay like this and perfect conditions and you'll get to see some good running rugby." 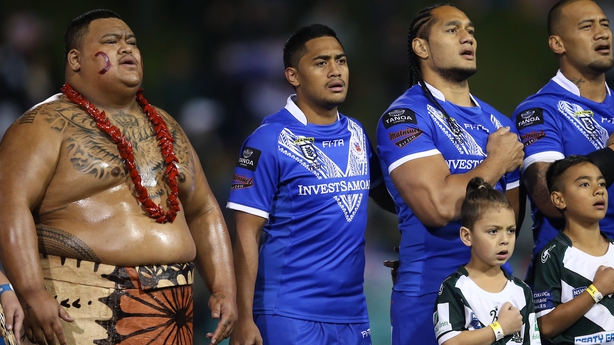 Last week's game was a 36-19 victory over a New Zealand Heartland XV in Auckland, only the fourth match for the team this year.

Getting players who mostly play abroad together regularly has long been a problem for Pacific island nations, making matches like Saturday's all the more important.

Samoa have been drawn in a tough World Cup pool with Ireland, Scotland, Japan and Russia but Jackson believes his side has the potential to make the knockout stages for the first time since the glory days of 1995.

And getting their first win over a tier one nation in five years on Saturday night would certainly further encourage the belief in his players that they can get out of the pool in Japan.

"Is quarter-finals realistic for us? Of course it is," he said.

"Just that our players need to believe that they're good enough to be there.

"Look, we can talk about the past, but this group of players know that it's the here and now, and we've got to create our own little legacy and create our own memories at this Rugby World Cup.

"Hopefully we'll create one tomorrow night and enjoy the occasion. There's no pressure on this group apart from the pressures that they put on themselves."