The bald tighthead prop with a penchant for hammer throwing, Gary Halpin, crashed over New Zealand's tryline. Giving the middle finger with both barrels, Ireland had arrived at the 1995 World Cup.

Ellis Park in Johannesburg in the opening Pool C game, ultimately reverted to an expected script of All Black dominance, with Jonah Lomu scoring twice as Ireland grew sluggish, and Lomu captured both the imagination and a fly hack ball as he ran in two tries.

The margins in the Irish win over Japan in the second pool game in Bloemfontein, appear comfortable on reflection. But the 22-point differential in the 50-28 win, suppresses the fact that at one stage in the second half, the Japanese were within five points of the Irish.

At the same ground, in their first game, the Welsh had made much easier work of the Japanese, before suffering a similar fate at the hands of Laurie Mains' All Blacks.

All this resulted in what many already felt before the seminal tournament in South Africa. Ireland and Wales would have each other to contend with, for a shot at reaching the quarter-final point of the tournament.

So, to Ellis Park. We knew the acoustics in Johannesburg would be good, even if the game wasn't sold out. Over the previous year both Whitney Houston and Roxette had performed and then released their concerts there on VHS, their breathless exhilarations about to be given a run for their money by fans who had travelled nearly 6,000 miles and didn't want to the ones who had to return home first.

Phil Coulter's Ireland's Call,in its nascent days, began proceedings.An anthem and a song that dovetailed with the end of the amateur era. Professional rugby would become a reality, less than three months after this game.

David Corkery, in particular, was caught up in the emotion of the occasion. Emitting primal roars of encouragement, neither inward or out, just raw energy and anticipation being released. But it wasn't hot air, Corkery was widely regarded as Ireland's best player at the tournament.

The curtain drawing down on the amateur era was reflected in the flags of clubs that have diminished from the forefront of rugby's consciousness. A reasonable home-made flag for a club from an old mining village in southern Wales - Ferndale RFC – stood amidst a fusion of Irish and Welsh fans. Jonah Lomu announced himself against Ireland

But so much else was unrecognisable. Sand buckets for place kickers, injury only substitutions, chaotic rucking, diminished regard for player welfare in the scrum as the front rows engaged with force and speed.

Irish Manager Noel Murphy and coach Gerry Murphy made the decision to start Niall Hogan at scrum-half ahead of Michael Bradley. Bradley had been dropped for the Japan game, it would transpire that the New Zealand defeat would be his last in a green jersey, 11 years after his solid debut in a narrow defeat to Australia.

Wales moved some pieces around themselves. Adrian Davies returned from injury to out-half, meaning Neil Jenkins was pushed to inside centre. Jonathan Humphreys had only made his debut in the defeat to New Zealand, but Manager Geoff Evans and Coach Alex Evans were impressed enough for him to continue.

Outside of the context of the World Cup, this game came about amidst an unorthodox run of results between the two countries in what was then the Five Nations. Wales hadn't beaten Ireland in Cardiff since 1983; Ireland had won five and drawn one. But this dominance wasn't reflected at Lansdowne Road, where Wales had won five of the previous six meetings.

So, calling this one - in front of an energetic crowd that made up for the pockets of empty spaces behind both posts - was tough.

Paddy Johns caught Eric Elwood's opening kick and when the ball was recycled, Hogan flung a pass for Elwood to launch a high ball amidst a crescendo of energy and pace that former Lions full-back Tony Clement let slip through his hands.

Ireland carried from the back of the scrum and Wales were in panic mode, eventually killing the ball and in doing so giving Ireland a penalty. It was relentless, fast and only 60 seconds old.

But what Ireland couldn't afford to do was have a similar start to the New Zealand game, only for the energy levels to peter out. It was about control and spreading themselves more evenly throughout the 80 minutes.

As he laboured back to the half-way line, Popplewell didn't look overly enamoured with himself, the oversized collars of his jersey almost in a state of independence

So, when Hogan stood over the ball and the crowd anticipated a charge of wild abandon at the Welsh line, Terry Kingston applied that old adage; take your points. He beckoned Hogan back and passed the retrieved ball to Elwood, who struck the penalty assuredly; which only added to his own incredulity when the ball drifted to the left of the posts. Wales could breathe.

But not for long. Wales put themselves under pressure again after some opening salvos between O'Shea and Clement, the respective full-backs. Hogan was feverish on a Welsh scrum and single-handedly the orthopaedic surgeon had the neck to force the Welsh forwards to cough up the ball.

From it, an Elwood penalty punt found touch, and something else not seen in the modern game, a line out just over a metre from the Welsh line. From it, Gabriel Fulcher was smooth and quick in his catch, and Corkery astute in the ruck as the pack worked closely to see Nick Popplewell drag himself over the line.

As he laboured back to the half-way line, Popplewell didn't look overly enamoured with himself, the oversized collars of his jersey almost in a state of independence. But he should have been, and so should Ireland. Elwood brought his international career to the 100-point mark and Ireland were looking comfortable. 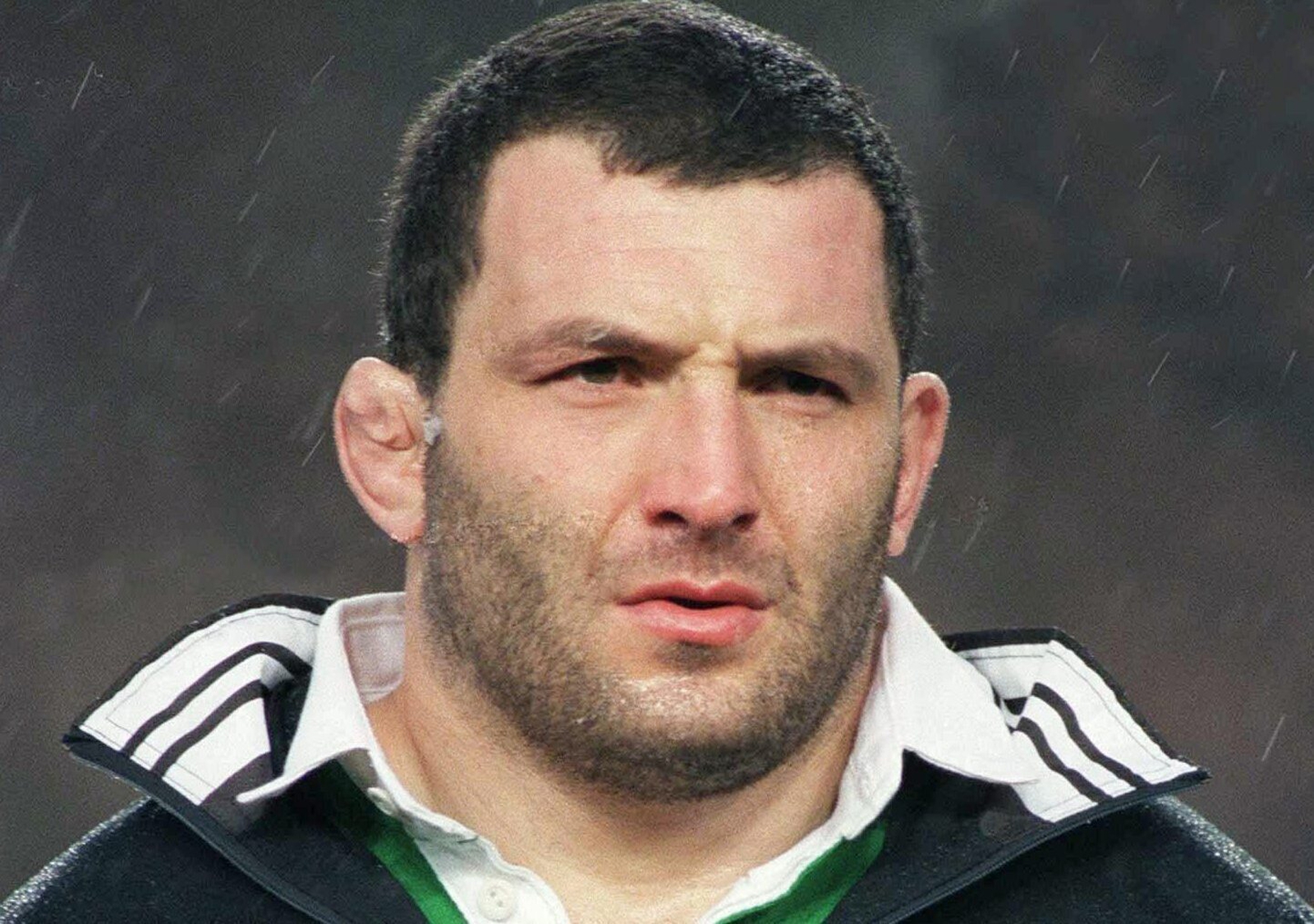 When Denis McBride scored Ireland's second try, the Antrim man clenched his fists and stamped his feet, falling just short of a jig. He was deserving of his delight. His foray into the heart of the Welsh pack saw him grounded, but his pace and footwork saw him bounce up, swivel and swerve and, with verve, cross the Welsh line. It was a special moment, especially considering some of the criticism he received on the back of a disappointing Five Nations.

Easing over, Elwood's conversion made it 14-0. It wasn't necessarily a case of no way back for Wales. But it looked a hard road to travel, such was the energy from the Irish.

When a shortened lineout fell favourably for Wales, the Welsh captain Mike Hall offered his side a lift. He evaded two tackles, side-stepped and then with that ferocious burst of power and pace, Ieuan Evans charged the flank and kicked down the line. The Irish gathered and Hogan found touch, but most significantly the Welsh had finally introduced some swagger.

If the out-half from Glamorgan had suffered some early career criticism for a conservative style of play, Neil Jenkins would go on to become one of the most prolific points scorers in the game. So, it was of little surprise when he put the first Welsh points on the board. He was the solid ground on which to build a comeback.

There was still just under half an hour played.

Ten minutes later, Adrian Davies picked up from a Welsh attack shortly before half-time and strung a calm drop-kick attempt between the posts. By the time it hit the turf, it was time for the gum-shields to come out. The deficit was being chipped at. Slowly. But the Welsh chisel was out.

Ireland's intensity and consistency was waning. The even spread of a performance hoped for wasn't evolving and when a lineout was clearly won early in the second half by Neil Francis, it was improbably lost when Humphreys, who never gave up on any cause, retrieved and instigated a ferocious drive.

Stuart Davies joined the party, and the Irish pack was on the flat, back foot. The Welsh broke left and then back across to the right, trying to discover a gap.

Simon Geoghegan, master of the side-step, stepped into a tackle, late, on Evans, and with it came the penalty and the opportunity for Jenkins to reduce the deficit to five. He struck the penalty, crisp and clear through the posts with stoic calm.

Ireland stemmed the flow and reversed it. A break from Geoghegan after some fine pack work opened up the Welsh defence and Eddie Halvey, on as a substitute, burst over for his second international try in five days.

What may seem hard to believe by today's standards, all the Pool C games were played within a nine-day window. While the quarter-finals wouldn't follow for another six days, the short turnaround was beginning to take its toll on both sides.

Ireland were tiring and stretched when a Welsh attack, spearheaded by Clement from 15, saw Humphreys saunter over, it was a worry. Clement had evaded a multitude of tired green jerseys before releasing his hooker. But energy levels were dangerously low. Luckily for Ireland, they were diminishing on the Welsh side too.

With less than ten minutes left, the feeling was the Welsh may have left it too late. 21-16. Time was running as quickly as energy. Ireland were pressurising the Welsh close to their own line. Hogan applauded a late surge. The Welsh wore a look of frustration and diminishing hope.

It all but evaporated when an offside decision in Ireland's favour saw Elwood extend the Irish lead to eight points. 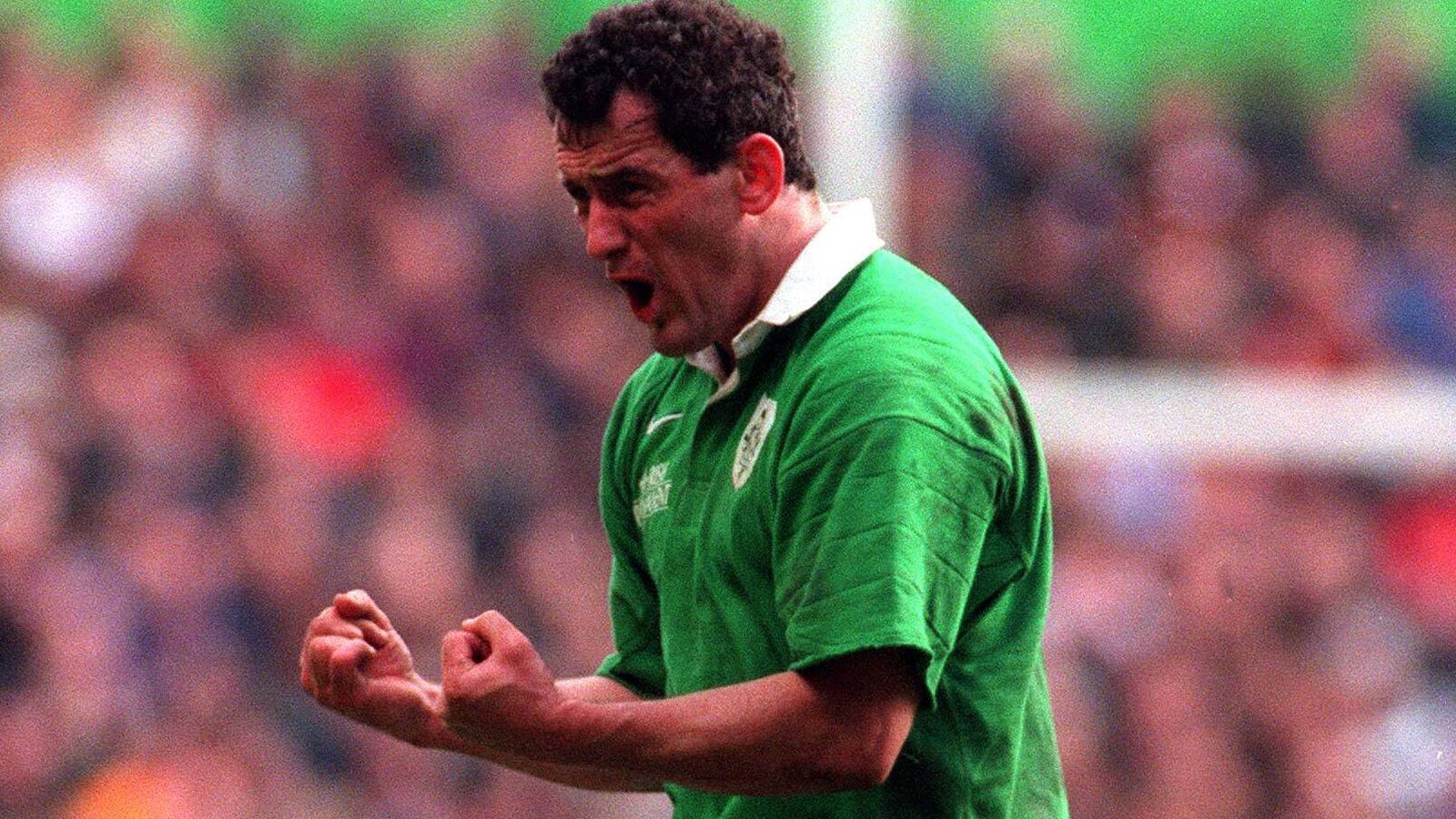 When Robert Jones fed John Davies from the base of a ruck, there was a flurry of unstructured activity, that didn't lack purpose or endeavour. Ireland went in over the top and the Welsh took their penalty wide and Hemi Taylor burst with pace and touched down.

Inevitably Jenkins converted but it was the Irish whose fists pumped the air as Jenkins' penalty landed on a motley crew in a largely unoccupied pocket behind the Irish line.

What was to follow was defeat in the quarter-final. And it was as resounding as could be feared. The boot of Thierry Lacroix in Durban, coupled with a try each from Philippe Saint-André and Émile Ntamack, saw the Irish return home to little fanfare, despite the drama that had unfolded in the Welsh game.

As a game, it highlighted the shortcomings of the amateur era, coming as it did at its very end. But it also showcased a passion-driven game that may have been far looser than anything the modern game might fathom, but in that it illustrated its capacity to entertain and intertwine the narrative of a game with moments of genuine drama.

This was such a game. And it was some game at that.