Johnny Sexton says he was "blessed" that a thumb injury didn't turn out to be more serious with the World Cup on the horizon.

The 2018 World Player of the Year will get his first run-out of the season against Wales on Saturday as Ireland complete a four-game warm-up series ahead of their Pool A opener with Scotland on 22 September.

The IRFU rarely goes into detail on player injuries and only last week coach Joe Schmidt denied that Sexton had a leg injury "per se" as had been reported.

The 34-year-old was photographed with strapping on his left hand over the last few weeks and, speaking to RTÉ Sport’s Michael Corcoran, gave details of the injury.

"It’s all good, it was just an unfortunate injury really," said Sexton, who will win his 84th cap at the Aviva.

"[I was] playing touch rugby, fitness games and got my hand caught in between someone’s legs and I dislocated my thumb.

"Look, I was blessed that it ended up being fine. It was four weeks in a splint and then looking after it, then get out and get comfortable with the ball again and reintroduce the contact.

"Yeah, it could have been a hell of a lot worse.

"It could have been one of them nightmare scenarios where you have to get an operation and then you are struggling to play any rugby before you go.

"Things could have been a lot worse so I’m unfortunate but thankful.

"I did a lot of extra running sessions and conditioning, which is good for me. It’s been a long time since I got a long block.

"Sometimes after Lions tours you get a few weeks and then you are back into it and then the next season you are looking after injuries [so] it was good to get an extended pre-season really.

"Hopefully I’ll see the benefits of it on Saturday if I get out there.

"That first match back is always a shock to the system so I’m nervous about that but looking forward to it as well." 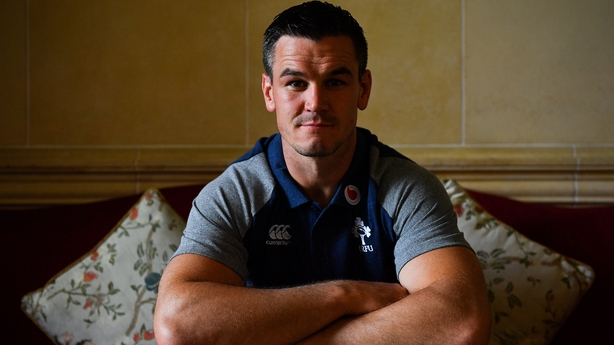 Saturday's game will be captain Rory Best and coach Joe Schmidt’s last home match, with the Ulster hooker set to retire and the New Zealander setting sail for home after six years in the role.

Sexton admitted that that fact will form part of their pre-match build-up.

He said: "We need to narrow the focus down to the Wales game and what we need to do preparation-wise to build in towards Scotland, but at the back of our minds when you talk about people who have had an impact on Irish rugby, I'm not sure any coaches will go on the list.

"It would all be players and Rory would probably jump on to that player-list for his captaincy and his playing over 120-odd caps.

"Joe, impact-wise, with Leinster and with Ireland has been phenomenal. Records speak for themselves.

"To do what he did with Leinster, we got six finals in three years and won four of them and then to go on and win three Championships with Ireland and the special games we've had, all the firsts were probably the most special.

"We'll miss him in terms of what he brings, what he has done."