Warren Gatland believes Wales have an opportunity to put "a massive dent" in Ireland's confidence on Saturday and "derail them a little bit."

Ireland will arrive at Cardiff's Principality Stadium on the back of a record 57-15 mauling against England.

And Wales head coach Gatland is in no mood to show mercy as both countries face their penultimate World Cup warm-up clash.

"I was surprised by the Ireland result (against England)," he said.

"They are under an enormous amount of pressure back home with a lot of criticism, given that they haven't progressed in World Cups further than they probably would have expected.

"There are a lot of doubts in the coaches' minds about who their best players are - some of their players are getting a bit older - is it a time to put some of the youngsters in?

"It's a massive game for Ireland that will answer a lot of questions.

"That's why I'm excited. It is a challenge for us. This is professional sport, and we can put a massive dent in their confidence and derail them a little bit." 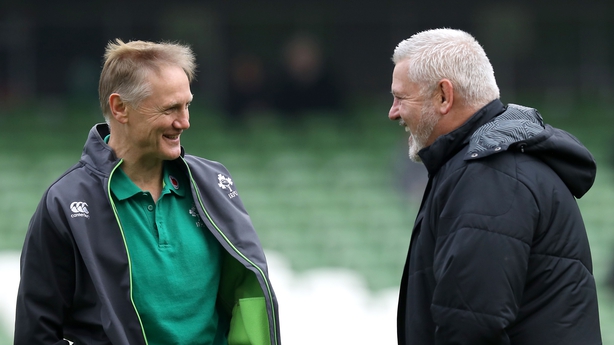 Wales will retain their world number one ranking if they win on Saturday, although World Rugby vice-chairman Agustin Pichot wants the system changed.

In a recent interview with an Argentinian website, Pichot joined critics of the world rankings format and he used Wales climbing above New Zealand - they have not beaten the All Blacks since 1953 - as an example of why he feels there should be an overhaul.

Asked about Pichot's comments, Gatland said: "I'm quite happy to decline the position. We, from now, will forfeit our position!

"We didn't go in and apply for it! If he (Pichot) is not happy, then take it off us! It doesn't bother us. We officially decline the position - thanks very much!"

Gatland will announce his 31-man World Cup squad on Sunday, and among those with a chance to impress against Ireland will be Test debutant Rhys Carre.

The 21-year-old prop, who was signed by English and European champions Saracens from Cardiff Blues earlier this year, gained a place in Gatland's expanded World Cup training group and now gets a golden opportunity.

Carre has lost the best part of 10kg in weight during a gruelling summer's training that included camps in the Swiss Alps and on Turkey's southern Mediterranean coast.

Carre said: "If it wasn't big enough getting here and winning my first cap for Wales, I've got that added pressure of potentially getting on the plane to go to Japan. I will try and produce my best performance.

"You expect it (training) to be tough, but you don"t expect it to be that tough. All the sessions are tough - you rarely get an easy day!

"Fiesch (Swiss Alps) was a wonderful experience, a wonderful place, but when it got down to the nitty-gritty in the training it was a tough old slog for two weeks. But it's in the bank now and we are all the better for it.

"There was one session which was just ridiculous, really.

"If you looked at the paper it was written on, you would have thought no-one could do that session, but we managed to do it.

"I couldn't describe the horrors. It was different types of running drills and games. It lasted just over an hour."