South Africa coach Rassie Erasmus believes his side's fate at the Rugby World Cup in Japan will likely be decided by finest of margins.

A bounce of a ball, a missed tackle or a refereeing decision could be the difference between disappointment and glory, though the Boks certainly head for the tournament in fine fettle.

Erasmus said his team's preparations, which included lifting the Rugby Championship for the first time in a decade, have been perfect, and they can have no excuse for not performing in Japan.

The former Munster head coach believes they are not favourites for the trophy, insisting the gap between the leading nations has closed over the last 12 months.

"If you go purely on world rankings, we are still hovering between four and five, so that says we are not favourites. But I think the gap between team one and five in the world has shrunk," Erasmus said.

"We are in with a much better chance than 18 months ago. I wouldn’t tag us as favourites, but we have a much more realistic chance." 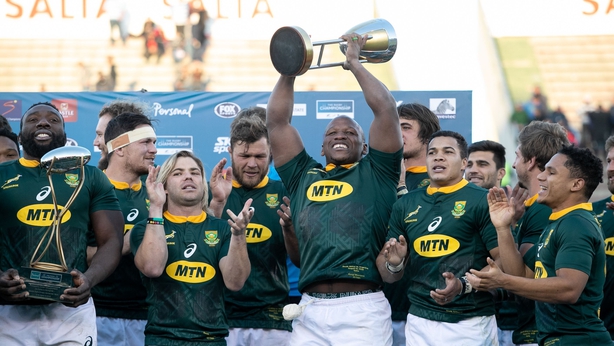 Erasmus believes he can find the right formula to win, but says the players must play their part too. The team will also need some good fortune if they are to claim a third World Cup title after previous successes in 1995 and 2007.

"My job is to coach well and the players' job is to play well. We do have the talent and we have worked really hard," he said.

"That is ultimately what we will be judged on. If we are lucky and we don’t get a lot of injuries, we should go deep in the tournament. And then it could be a referee’s decision, a bounce of a ball or a missed tackle."

Erasmus's preparations have included sending an advanced party of players to New Zealand a week early during the Rugby Championship and resting 18 of his top players for their most recent 24-18 warm-up win over Argentina earlier this month.

"We feel we are fit and fairly injury-free at this stage. We certainly feel we are in a good space, but when we get onto that plane all the past games from this year count for nothing," he said.

"All the preparation we have done so far has put us in a good position, we can’t look at any excuses that we had hiccups in preparation, bad injuries or logistical challenges, so if things don’t go our way, we can only point fingers at ourselves." 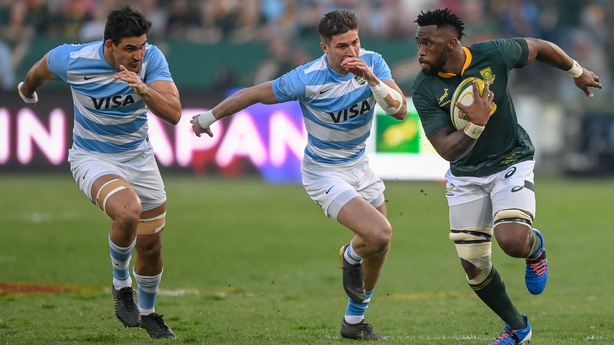 He says the selection of captain Siya Kolisi is key after the flank missed much of the international season with a knee injury but was able to prove his fitness in the win over Argentina.

Kolisi, the first black Test captain of the Boks, is a vital component of the side on and off the pitch, according to Erasmus, who acknowledges the need to broaden the game's appeal to young black players in South Africa.

"When I appointed him captain last year, I did not know he would bring so much to the team off the field.

"I usually appoint captains for what they bring on the field, not off it, but my eyes weren’t open to what it meant for people around the country.

"He is doing a wonderful job. In the beginning he was struggling with that (captaincy), I think the first three, four games he played he suffered a bit.

"But perhaps I did not manage him too well in that period. He had to come through that and he has. He is really maturing and the way he carries himself is amazing."

The Boks open their campaign against defending champions New Zealand in Yokohama on 21 September before further group games against Namibia, Italy and Canada.